For those who didn’t follow my blog last year, I LOVE HALLOWEEN. Almost as much as I love Christmas. I blogged about it last year and shared some of my costumes over the years.
Once again I’m going to reiterate that Halloween is awesome because of all the candy and dressing up in costume. It’s fueling for a writer to get to be someone else for a day. That’s why in past years I chose to dress up as characters from whatever story I was working on at the time.
This year was a little different. I thought about dressing up as Kylanore and forcing the husband to be Luzigo, but we didn’t have the money to spend on costumes like that. Maybe one day I’ll get to dress up as her.
To go cheap, we were going to dress up as Chuck and Sarah from the tv show Chuck because it’s one of our favorite shows that we watched a lot when we first started dating. But again, something came up and we had to do a last minute change.
What came up? A little surprise I’d kept under wraps until last night when our apartment complex celebrated Halloween with trunk-or-treating. This surprise demanded that we change our costumes to fit. But since we were under a time crunch and a money crunch, we had to do with a quick and easy $5 costume (yes, it only cost $5). 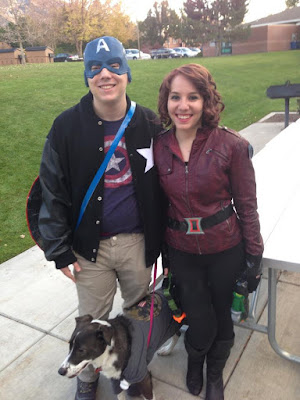 Husband of mine wanted to reuse his costume from last year, and wanted me to dress up as Black Widow because of my new hair color! Surprise! I dyed my hair over the weekend! I’ve been wanting to go dark for a really long time, but never had the guts to do it until now. So I went auburn. And auburn hair demands an awesome costume to match. For trunk-or-treating we decorated our car with red and blue and blasted Avengers and Captain America music from our speakers. 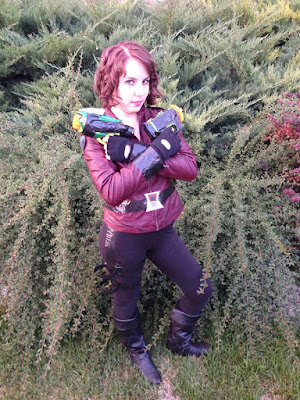 I’m super proud of this costume that I threw together in a matter of hours yesterday. I took black pants I already owned, a black shirt, black boots, and my red leather jacket, then I cut off the fingers of Husband of Mine’s old gloves (he bought a new pair because these ones had holes, then we salvaged them for the costume). The nerf guns were a Christmas present from one of my sisters, and the rest is duct tape! The belt, the cuffs, and pay special attention to my duct tape leg holster that I customized to fit one of my nerf guns. I even have S.H.I.E.L.D. patches on my shoulders.
But unfortunately, we did not win best costume. We got beat out by a Star Wars couple. I was pretty bitter about it because my costume is awesome. There was an adorable boy dressed up as Iron Man who kept smiling at us but was too shy to actually approach us.
However, we did win one prize. Astrid won funniest costume. Here’s a closer look. 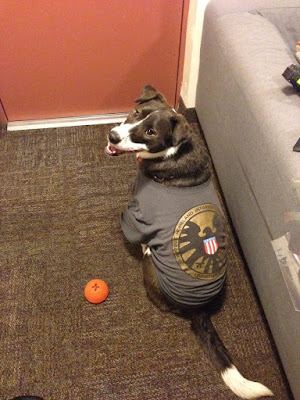 That’s right. She’s a S.H.I.E.L.D. agent! And the most adorable agent, I might add.
So Husband of Mine and I did not win the costume contest this year, but we’re going out again on Saturday to go Halloween Caroling (singing Christmas carols with Halloween lyrics) with some friends in costume. So I get to wear my costume again, which is exciting!
I love Halloween. It’s high energy and fun for everyone. Seeing all the kids in costume is inspiring and reminds me why I love being creative and why I do what I do. It fuels my creative energy and gets me pumped to write again, just in time for NaNoWriMo.
~Allie

2 thoughts on “Halloween (A Little Early)”