It’s been a while since I’ve done some free writing, and today I’m battling major Hypergraphia. So it was fairly easy for me to pick a blog post topic today. Originally I wasn’t going to pick a prompt, but I had a really hard time channeling my Hypergraphia into something productive. I’ll explain at the end. Here’s the prompt- 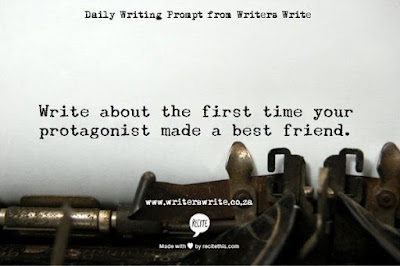 Iris left the castle’s infirmary only to collect herbs for her mother’s supplies once a week, so it was no surprise she got lost in the twisting maze of hallways. She passed by dozens of bustling servants, but each time she tried to ask one for directions, they brushed her off and hurried on their way.
After another minute, she spotted a boy staring out the window. He wouldn’t ignore her. “Excuse me, King Jameson passed away overnight, and I need to find Queen Isadore’s chambers to tell her.”
The boy turned to face her.
Iris recognized him immediately. He had spent every evening in the infirmary at his father’s side. “Crown Prince Callister,” she gasped and quickly dropped into the lowest curtsy her trousers would allow.

The prince searched her with his brown eyes, until he spotted the infirmary’s gray cross on her apron. Without a word, he hurried off the way she came.
She turned to follow him, but if she returned without the other royals, her mother would send her back out to finish the task. So she continued down the winding hallways until she located Queen Isadore’s chambers and told her the news.
“Oh, Iris.” She blinked a few times before muffling painful sobs with her hand and collapsing onto a sofa.
One of the queen’s ladies hurried to her side and helped her back onto her feet. “Your majesty, the children.”
“They need to say goodbye to their father. Please gather them together.” She stood and calmed her breathing before looking back at me. “Iris will escort me to the infirmary so Alanis and I can start on the funeral arrangements. Please.” With another deep breath, she gathered her skirts and led the way back to the infirmary.
Iris followed closely at her heel. After a moment, she heard sniffling coming from the queen, and offered up the handkerchief from her apron pocket.
Isadore smiled through her tears and accepted it.
They arrived at the infirmary and Isadore immediately ran and embraced Iris’s mother. “Alanis.”
“You knew that even with my Life Fairy abilities, there was a slim chance he would survive such an illness. The royal council has been preparing for this for years.” Alanis seated her friend in a chair next to the covered body of the deceased king. “Everything has been planned out for you. You’ll survive this. You’re stronger than anyone I know.”
They were interrupted by the arrival of Princess Beatrice, Princess Cassandra, and baby Prince Luca.
Iris stepped off to the side, unable to watch the children say goodbye to their father. She busied herself by organizing her mother’s inventory of medicines and herbs in the corner.
“Where’s Callister?” Isadore asked.
“He wasn’t in his room.” Isadore’s lady replied over the sobs of the children.
“Did Oliver know?”
Iris turned to face the queen. “I saw him on my way to meet you, your majesty.”
“And where did he go?”
She shrugged.
“He’s probably out in the gardens, mother.” Princess Beatrice spoke up.
“Iris, could you go find him again?” Isadore pleaded.
She nodded and curtsied. “Of course, your majesty.” Iris knew the castle gardens better than anyone. She hurried down the winding staircase that led straight to Alanis’s greenhouses full of herbs. Stopping only for a moment, she glanced back at the castle to find the door the Callister most likely exited from, then started her search.
After searching through the greenhouses, Iris walked through a dense cluster of trees to the edge of the Mer lake.
Crown Prince Callister sat a few feet away, staring off into the distance.
Iris approached him. “Your highness?”
He stood quickly and lost his balance, tumbling into the water.
Iris jumped into action. Unfolding her dark purple wings from her back, she flew up and dove down to catch Callister before falling in all the way.
“What?” He struggled against her grip, stunned at her sudden transformation to fairy.
She lost control, and they tumbled to the ground.
“You’re a fairy?” His brown eyes widened with his smile.
Iris nodded, uncomfortable that her secret had been outed. Her mother had always warned her to be careful about who knew their secret. Humans didn’t always appreciate magics.
“What kind of fairy?” He scrambled on his hands and knees over to her side to examine her wings.
“I’m a Moon Fairy.” One of her wings twitched at his touch.
He jumped back, then laughed. “No way.” He touched her wing again and this time it didn’t twitch. “Is your mother a fairy, too?”
“She’s a Life Fairy. That’s why she was your father’s physician.”
His face fell. “Why couldn’t she save him then?”
“Fairies can’t do everything,” she retorted.
“Well what good are fairies then?”
Offended, Iris shoved him into the water.
The water was shallow, but Callister still ended up dripping wet.
“What good are you? You’re just a human.”
He glared at her, his eyebrows knit tightly together, then he started laughing and he splashed her.
“Hey! Watch it! If my wings get wet, then I can’t fly.” She shook them out before folding them back up between her shoulder blades.
He stood up in the knee deep water and shook out his blonde hair.
Iris squealed and backed away from the water.
Callister continued to laugh as he climbed out of the Mer. “I’m going to have to change before I can face my mother again.”
“She sent me down here to get you. Your whole family is up in the infirmary now.”
He sighed. “I guess we should go then.”
“I’m sorry I pushed you in the lake, Crown Prince Callister.”
“No you’re not.”
She giggled and shook her head.
“And call me Cal.”

This is a short scene I threw together that may or may not be the beginning of my new project titled A Fairy’s Tale. Iris is 9 years old at the time, and Cal is 11 when he becomes King of Roan.
I started writing the first draft of A Fairy’s Tale when I was thirteen years old. It was my first real attempt at writing a book I thought might be published some day. Of course, the original version of the book sounds like it was written by a thirteen year old and will never see the light of day. The dialogue is terrible, the characters (all based off real people from my life at the time) make no sense in the actual story, and the storyline had no direction. But I’m taking bits and pieces that I liked and I’m fitting them together into a whole new story based off this original idea.
There are 3 types of fairies identified by their wing color and unique magical abilities:
Aura:
Sun– Yellow wings- light and appearance manipulation
Moon– Purple wings- shadow and appearance manipulation
Form:
Element– Red, green, dark blue, and light blue wings- elemental manipulation
Shifter– Silver wings- object manipulation
Health:
Life– Orange wings- Physical manipulation, healing
Spirit– Pink wings- mental healing, mind reading
Here’s a quick blurb-
When Roan is threatened by neighboring kingdoms, King Callister asks his childhood friend Iris, a moon fairy, to join him as they travel and try to patch relations with neighboring kingdoms and fix the growing rift between magics and humans. Along the way, they discover that Callister’s father was murdered by someone, and that same mysterious figure is threatening Callister’s life as well.
And that’s my new project! It’s not fully fleshed out yet, but it’s getting there. I’m still focusing most of my efforts on Powerful, but I work on A Fairy’s Tale whenever I need a break from editing. I’ll post character sketches soon!
~Allie