Skip to content
4th April 2016 alliemay
It’s Monday again! Yay! That means we get another guest! Today’s guest is *drumroll* Heather Hayden!
Hi everyone! I’m Heather, an author of science fiction and fantasy who spends most of her time in her imagination rather than the real world.…that sounded a lot blander on paper than in my head. Here, have a picture instead: 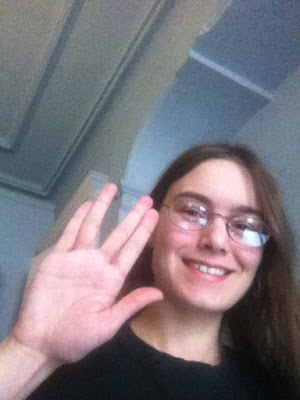 When I signed up for Allie’s blog series, I forgot how much I hate having my picture taken… (Apologies for the bad quality, but my iPod has a crappy camera, my sister currently has my actual camera, and my computer screen reflected in my glasses when I tried to use the computer’s camera. Sigh. At least my smile looks semi-normal for once.)

Anyways, this blog post is about my daily life as a writer. Now, granted, the following transcript is of a single day, and my days tend to vary depending on a variety of factors from work available to mood to social life (or lack thereof.)

9:37 AM – I wake up to the cat meowing, not in my face this morning, but still loud enough to hear from my room. At first I think it’s earlier, because the alarm clock says 8:46 AM or something close to that, but my phone reminds me that it’s the day of Daylight Savings starting again. Goodbye, extra hour. Yawning, I dismiss the idea to go back to sleep and head over to my browser to check social media sites and email. Since my computer sleeps on the bed next to me (oh, how I love queen-sized beds!), it takes less than a minute to be connected.

I’m distracted for a few minutes by a webcomic (Erfworld, for those who enjoy fantasy webcomics, is wonderful), but catch myself in the act, save the page, and close the tab.

10 AM – Done with social media sites for now. Time to check for editing jobs. My work-editing is on a case-by-case basis, and sometimes there isn’t work available, so I have to schedule my writing around my editing. There’s nothing worth picking up today, so I head to check FB, the one social media site I forgot to check, and spend some time looking at photos my sister posted. She’s in Ireland, so of course they’re gorgeous. (Helps that she borrowed my camera. She’s getting really good with the panorama setting.)

10:29 AM – Time to get dressed and have breakfast, as my stomach’s complaining.

10:49 AM – Returned to my room and am eating breakfast now. Meant to take a photo, but since my scrambled eggs and baby spinach have vanished from the plate already, I won’t bother. (The eggs were supplemented with hickory-smoked vegetarian “bacon” and a buttered slice of Irish soda bread, for those of you who are food-inclined.)

While I’m eating breakfast, if I’m not too busy inhaling food to think, I often deal with either social media or work on a critique. I love Scribophile and I’m currently reading through several manuscripts.

Here’s a photo of my current workspace: 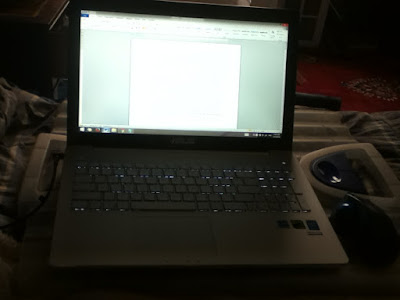 (Sorry it’s so dark; it’s an overcast day so the seven foot tall picture windows aren’t actually letting in much light, and the room light is dim. 🙁 )

Yes, I work on my bed. Yes, it works for me. Comes from homeschooling through high school and doing most of my studying on my bed, I think. I don’t like desks. And, yes, that’s a plastic tote cover under my computer… After some issues yesterday my friend* decided that I wasn’t taking care of my computer (he was right) and got the cover as a temporary measure until I can get a lap desk. I do have a lap desk, it’s just at home.

Oh, and I don’t use the mouse for work, just for gaming. I’m used to the trackpad for regular writing/editing/etc., but if you’ve ever tried gaming on a trackpad, you know how difficult it is. I have a trackball mouse because I have wrist issues. It took some getting used to, but I’m really good with it now.

*I’m currently staying a friend’s house… We’ve just realized that I’ve been here pretty much since Halloween, with the exception of when I went home for Christmas, one week I spent at my aunt’s, and a week in January when I was visiting my best friend. I’m heading home at the end of the month, but it’s been good to be here, since my sister’s currently out of the country and I have no one to hang out with near my parents’ house.

11:22 AM – Mom calls me on Skype, so I spend an hour catching up with her since we haven’t spoken since…I’m not entirely sure when. She comments on the fact I’m still in my pajamas (gold fake-silk gloriousness), and I shrug—I like to be comfy if I don’t need to go out.

12:11 PM – The Skype call drops, and since it’s not on my end I guess something happened either with Skype or on her end. Back I go to critiquing…

12:43 PM – On my second critique of the day now. Can’t believe it’s already quarter to one—where is the day going? I have a lot I want to get done today—I’d like to critique five chapters, and finish the timeline for Demon’s Blade (so close on that!), and maybe even get started on the first revision of Upgrade. Oh, and play Minecraft, since for the past couple of days my friend’s computer has been out of order…

12:50 PM – I finish my second chapter critique, and take a moment to email the leader of my favorite Scribophile group (Fast Critters) that I’ll be putting Upgrade into the next cycle. Hopefully I’ll be able to spend the next few days revising Upgrade so the second draft can be crit in this upcoming cycle… It’s going slower than I expected, but I’m hoping to have it revised and ready by the end of April (rather than March as I had previously planned.)

I should say a quick thing about Upgrade, probably… It’s the sequel to Augment, the YA science fiction novella I published last year, and follows the continuing adventures of Viki, an Augmented teen, and her friend Halle, a rogue AI. Upgrade focuses more on Halle, and introduces some new characters as well as brings back some characters from the previous book. It’s still in rough form and needs a lot of polishing, but I’m pleased with how it came out.

12:54 PM – I start critting a third chapter, figuring that if I can finish five chapter critiques by half past one, I can take a short break to check my favorite webcomics for updates. On a whim, I quickly Google something before I forget it—when does the next Once Upon A Time episode air?

TONIGHT. That means I’ll be able to watch it tomorrow (I can’t watch it on tv, and besides, I hate ads.) Cue fangirl squeeing as I’ve been waiting for this tv show to come off its mid-season hiatus for ages.

2:05 PM – Haven’t made much progress on the third chapter I’m critting, but I wrote the beginning of this blog post, spent far too long trying to get a good picture of myself (have I mentioned I hate taking my photo?), posted a belated Saturday Shorts, and gave Mom some advice on how to deal with a sticky key on a laptop’s keyboard. So I may not have been doing what I meant to be doing, but I’m still getting things done.

2:26 PM – Apparently I was actually critting the fourth chapter of the day, not the third, and I just finished it. Time to take a break and go get food for myself and my friend…who doesn’t know what he wants which makes it really difficult to decide what to get! Grumble, grumble. Obviously, I can’t go out in my lovely pajamas, so I toss on a dress and head out in hopes of finding the gyro truck.

3:10 PM – Just finished inhaling a slice of pizza—forgot it was Sunday so several of my other attempted stops were closed. Waiting for my friend to join me in case he wants the other slice. I wasn’t able to get gyros because it’s Sunday and a lot of places weren’t open.

6:43 PM – Caught up with blog posts, and am now working on critting the fifth chapter for the day. Also, my Girl Scout cookies finally arrived! Hurray!

7:22 PM – Finished my sixth chapter critique for the day. I normally can’t do this many critiques in a day, but I’m really enjoying the novel I’m critting, they’re regular-length chapters, and I haven’t done much of anything else today.

At some point before 11 PM we had dinner—my friend’s mom made pasta, homemade pasta sauce, and collard greens with breadcrumbs and cheese. Quite tasty!

10:53 PM – When did it get so late?! I’ve been bouncing between the timeline and the webcomic for a while, but I’ve finally finished the timeline for Demon’s Blade, so I think I’ve earned some Minecraft time. Oh, and I got into the lemony GS cookies and they’re sooo good. Half the box is already gone. (I did share some, don’t worry!)

12:46 AM – I close Minecraft, finish this blog post, and check a few social media sites as I wrap things up for the night. Some nights I stay up later, some nights I go to bed even earlier, but tonight it’s about quarter to one when I decide to snuggle down for some well-earned sleep. Tomorrow, I’ll do work-editing if there’s some available, or continue critiquing and begin working on Upgrade’s edits if there’s not. My daily schedule fluctuates, but the end-goal is always the same—continuing to make progress with my writing.

Some of my quirks:

You can visit me at my blog, “Heather Hayden’s Writing Logs”, and also follow me on Twitter, @HHaydenWriter. My first novella, Augment , was published last year, at the same time I started a publishing company with my sister. (We aren’t accepting outside submissions yet, but in another five or so years hope to have gained a better understanding of the publishing business and then might consider opening our doors to other authors.) My second novella, Upgrade, is in the process of being revised with the current hopeful release date being sometime in April.

I wish I could work from my bed, but Husband of Mine still refuses to buy me one of those chair pillows so I can have a cup holder to keep from spilling my Dr. Pepper and pockets for all my notes and stuff. Maybe I’ll get it this summer when we’re living with family again and I have no place to work except my bed. Good luck finishing Upgrade, and enjoy those girl scout cookies!
Check out the other guests’ days here- “A Day in the Life of…” And if you want to participate, comment here or find me on Facebook or Twitter!
~Allie

2 thoughts on “A Day in the Life of…Heather Hayden!”