Fear is something inside all of us. It makes us human. It makes us real and relatable. But, sometimes we don’t know what we fear until we face it.

I am one of those people who doesn’t quite know what I fear. I woke up around 3 am because of an earthquake. I woke up to the shaking, rolled over, and went back to sleep. I grew up living on the San Andreas Fault (we still live on it), so earthquakes don’t really scare me. But, I’ve never been through a really big one. Maybe when I experience a really big one, I’ll be scared.
I don’t fear death. I do fear injury. Car crashes scare me. Hurricanes are pretty scary and tornadoes are too, but they are also fairly predictable (unlike earthquakes which don’t scare me).
When asked what I’m afraid of, I always have two answers- bees and thunder. I’m allergic to bees, so it’s only natural for me to fear them. Thunder is my one completely illogical fear, but I can’t think my way out of being scared of it. I hate thunderstorms. I usually have to sit with headphones in listening to loud music or watching a loud tv show or movie. I guess I’m also scared of crazy horror movies, but I can avoid those. 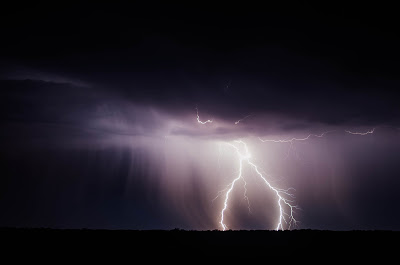 But bees and thunder aren’t big fears. And because of my personal struggle to identify my own fears, I have trouble putting fears into my writing.
Characters need fears for the same reason they need quirks and habits. It makes them real to readers. Fears may not always come up in our writing, though. It may not be relevant to the plot. But the best kind of plots push a character to face their fear or weakness and overcome it.
I found this on Pinterest, and I’ve found it to be a very helpful tool for my writing. 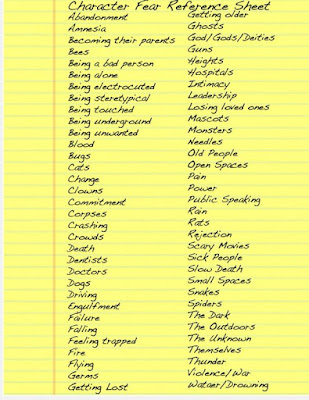 It’s not an all-encompassing list of fears, but I think it is enough to at least spark ideas.
But here’s the big question- Why do our characters need fear? Because a character in a book cannot be perfect. They need flaws. They need to fail. Maybe this doesn’t take the form of a fear for your character. Maybe it’s an emotional cripple, or even a physical one. Something needs to stop them from reaching their goal.
One of my hardest blocks in my own writing is that my two main characters right now (Iris in A Fairy’s Tale and Kyla in Powerful) don’t fear death. It’s based off my own non-fear of death. For Kyla, she would accept it because she wouldn’t have to deal with all the prejudices against her, and she has nothing to lose until she does have something to lose. Iris, on the other hand, thinks she is untouchable because she’s a young teenager and eventually has to overcome her crippling fear of mortality.
The most important part is that it needs to relate to the plot of your story. If your book has nothing to do with these fears, then maybe you need different kinds of blocks for you characters to overcome, like bad habits or a different kind of flaw. Again, these aren’t all encompassing lists, but they are very helpful references. 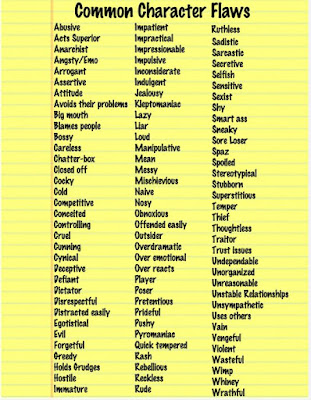 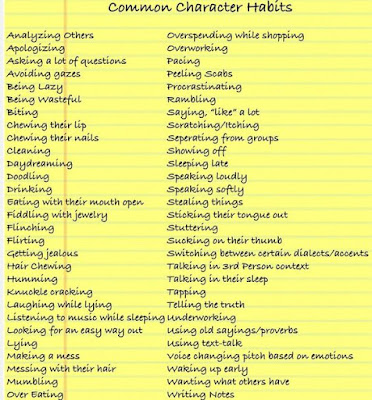 Giving your characters these flaws or blocks to overcome will not only make your characters more real to readers, but sometimes they can add depth to your plot you didn’t realize wasn’t there. Sometimes it can help fill that plot hole you were working on, or even finish the story line you got stuck plotting.
Always always ALWAYS do some form of character sketches. Especially if you are stuck. Obviously this is my own opinion and it won’t work for everyone, but at least give it a shot. I have yet to finish plotting out A Fairy’s Tale because I haven’t figured out all of my characters yet. When I figure out each of their stories and their purposes in the story, then I can figure out the whole plot. It was the same problem I had with Powerful. I couldn’t figure out the ending until I figured out why this one character was even in the story. Then it filled the hole and the story was complete. I’ve got a few characters left, but I’m hoping to work on that this week and next while I finish editing this chapter of Powerful.
And remember, that sometimes you have to throw a random block to your character to see what happens with the story. Maybe it helps, maybe it doesn’t. But it’s always worth trying.
~Allie