A story is defined as, “a narrative, either true or fictitious, in prose or verse, designed tointerest, amuse, or instruct the hearer or reader.” But a story can take many different forms.
With today’s technology, we are overwhelmed with stories in the media. New movies comes out every week, new television episodes air every day, and even beyond that, we had an overwhelming amount of video games, board games, RPGs, etc. which all tell their own unique story.
All stories have five elements- characters, setting, conflict, plot, and theme. They take those five elements and incorporate them in different ways to make different stories. What I’m going to do is take different stories from pop culture and analyze them to figure out why some stories are so successful. Today we’re going to start with the tv show, Phineas and Ferb.

Characters: Phineas and Ferb are step-brothers with a knack for creative invention and making the impossible possible. Their sister, Candace, is constantly trying to stop their shenanigans. Perry is their pet platypus, who is a secret agent trying to stop the evil and incompetent Dr. Doofenshmirtz. There are other characters who appear in most episodes, like the girl-from-across-the-street Isabella, the bully Buford, and the super smart nerd Baljeet.
Setting: Danville, in the Tri-State area. Typically the episodes take place in Phineas and Ferb’s suburban backyard while the mom run errands around town. Agent P’s scenes typically take place at Doofenshmirtz Evil Inc.
Conflict: What makes Phineas and Ferb so unique, is that every episode follows the same basic conflict. Candace tries to bust Phineas and Ferb, but is inevitably thwarted by the “universe”, while Perry the Platypus fights Dr. Doofenshmirtz as he tries to take over the Tri-State area. 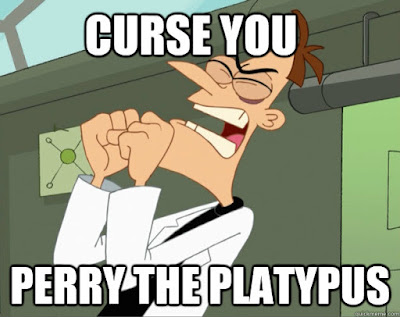 Now, none of that seems particularly groundbreaking. But that’s what makes this show so great. It’s so seemingly average, that the writing has to be truly special. The best part of the show is when it comes to the later seasons and they start to play on their own clichés.
For example, when repeating the same line, “Where’s Perry?” in every episode, they started to change it up to purposefully avoid saying the same line. It got switched around to “Where’s Ferb?” or “Have you seen Perry? ‘Cause I haven’t.”
But the best was when they started breaking the fourth wall. There’s even one episode where they reference it, when Major Monogram specifically says, “Carl, what have I told you about breaking the fourth wall?”

The writing of this “kids show” is entertaining for all ages. Some of Phineas and Ferb’s biggest fans are the middle aged parents who started watching the show because of their kids. My Father-in-law specifically loved an episode that referenced the Shawshank Redemption, a reference that the younger kids missed. Quality writing appeals to all ages, and Phineas and Ferb truly appeals to all ages.
Phineas and Ferb is definitely a show worth watching, and I’m not just saying that because I’ve watched it over and over again. This show is witty and humorous, and it’s fun to see how many different ways they can make the same things happen. I would highly recommend this show to everyone, if only to see what makes the writing so unique.
Now, because I enjoyed writing this post so much, I’ve decided to turn this “Why So Successful?” theme into a series! In the comments, recommend your favorite television shows or movies for me to figure out exactly what makes the story so compelling and popular.
~Allie
SaveSave

1 thought on “Why So Successful- Phineas and Ferb”