To celebrate the release of the second JL Anthology, JL writers are hosting an exciting giveaway! Win our Ebook bundle, including copies of both anthologies, along with four other exciting reads, plus a beautiful leather journal. 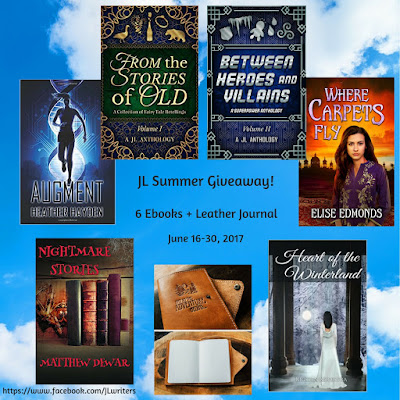 Between Heroes and Villains
a JL Anthology

What is the difference between a hero and a villain?

A hero should always use their power for good: a detective devotes his life to chasing gifted villains; a girl uses her frost powers to rescue her father; a weary sidekick faces her childhood nemesis; and a young man must protect his loved ones against a tyrannical authority.

But having unique gifts means facing tough decisions: a doctor must choose between saving his reputation or his patient; a young woman saves a drowning man and finds herself in danger as a result; a student discovers the consequences of choice; and a wannabe hero takes on a supervillain hoping she’ll be invited to the hero’s league.

And the line between good and evil is oftentimes blurred: a self-made hero crosses that line to save the world; a lovesick henchman blindly follows his master’s orders; a mentor attempts to prevent a pupil from being drawn to villainy; a superpowered military team questions their orders despite the inevitable consequences.

Follow these men and women as they set out to save themselves, and the world, from the great evils around them.

From the Stories of Old
a JL Anthology

In this international collection, new life is given to fairy tales, both classic and obscure.

Mythical creatures put the fairy in Fairy Tale. Mermaids, selkies, and ocean guardians experience the best and worst of humanity; sisters encounter an unusually friendly bear; a brave bride meets a silly goose; and a spinner of gold sets the record straight.

Urban fantasies modernize classics: a Frenchman learns the truth about magic, his past, and his girlfriend; a girl sets out to find love but receives a curse; and today’s naughty list makes Old Saint Nick not-so-jolly.

New worlds bring a fresh sense of wonder! In the future, a young woman fights for her people and herself; a bastard son finds acceptance in a world ruled by women; and a farmer’s wits win the heart of a frosty king.

Discover unexpected twists on old favorites, and fall in love with new tales and worlds to explore!

By Government-enforced mandate, genetic augmentation and implant technology cannot coexist in the same human body. Sixteen year old Viki’s life has depended on her implants since she was five. Now her implants are failing. When Viki discovers that the malfunctions are due to illegal augmentation, she is determined to find those responsible. However, Agent Smith of the Search and Retrieval Bureau is also looking for the geneticists who augmented Viki, and his orders are to capture them by any means necessary—even if it requires risking Viki’s life by using her as bait. Viki’s friend Halle, a rogue AI, is doing its best to help her search, but Halle has its own problems. Agent Smith had been closing in on the AI before being reassigned to Viki’s case, and Smith’s partner is still on the hunt. Searching for the geneticists risks exposing Halle, but Viki and her friend must find them first—they are her only chance for survival.

Where Carpets Fly
by Elise Edmonds

Twelve young teens learn that happily ever afters only exist in fairy tales.

Jessica has heard the rumours about drop bears, but are they real?

What will Connor see on the prison tour?

Whose old boot did Jack catch while fishing with his dad?

Will Jane end up with a lump of coal in her Christmas stocking?

Find out in these twelve creepy Nightmare Stories.

Heart of the Winterland
by Kristen Kooistra

The Princess
On her 200th birthday, the enchantment that holds Princess Calisandra in a state of apathy breaks. Full of questions about her kingdom’s history and what lies outside the borders of her snow-cursed kingdom, she leaves home in search of answers.

The Sorceress
Fate has always been against Amee. Orphaned as a baby, she grew up with darkness snuffing out what little light she could find in her life. When her spirit breaks, she sequesters herself in the border forest. Powerful and angry, she waits …

The Fugitive
A desperate search has brought Angel far from her home, but now Captain Kota’s relentless pursuit keeps her from her task. When she crosses paths with a naïve princess and a sage orb, she finds more than she anticipated.

This giveaway will run from 16-30 June 2017 GMT+1 and is open worldwide. The prize is six Ebooks and one leather journal, as pictured. We reserve the right to substitute the leather journal for an Amazon voucher of equal value for non-US countries. Entry is via Rafflecopter, gained by following the various social media accounts listed. The winner will be chosen at random and will be informed by email. The winner has 48 hours to respond to the winner notification to claim their prize. The prizes will be delivered by the authors, and also via Etsy in accordance with their standard delivery terms.