For today’s blog post, I decided to try something different.  Last week I posted a bunch of ways to overcome The Block, and I posted a few fun writing prompts to help spark the word flow once more.  Thinking I would be a hypocrite if I gave the advice and didn’t try it myself, I decided I would take two of my characters from Rose and insert them into a prompt to see if it would spark anything for me.  So I chose this prompt: 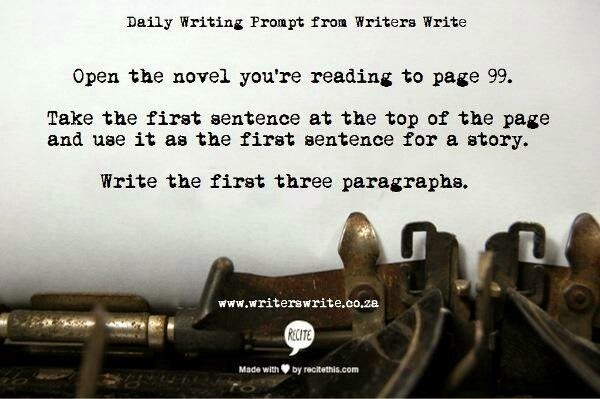 Which brought up the line, “The woman rose from the chair and held out her hand.”  I know.  This could go anywhere.  It’s a daunting task, but I’m actually kind of excited to see what could happen.  That’s the thing about free writes, even the writer doesn’t know what is going to happen until it’s written.  So here I go.
**I’m going to write more than 3 paragraphs because the dialogue is going to cut that scene extremely short**
The woman rose from the chair and held out her hand.  “It’s very nice to finally meet you, Rose.  I’ve seen how often you sit under that tree, and it has intrigued me.  You are not like others your age.”
Intimidated by the stranger’s green eyes, Rose cautiously proceeded to shake her hand.  “It’s very nice to meet you too, Mallorie.  I’ve never actually seen you here before, and I thought I knew everyone in Domfront.  I supposed that’s because whenever I’m here, I’m distracted by whatever book I brought along.”
“It’s rare to see someone so captivated by a book’s pages.”
“Well, being raised by mes tantes, I never had television or movies.  All I had was the books they owned.”
“No television?  Vraiment?  That is very unusual.  You must have had a peculiar childhood, not being raised by your parents.”
“It does seem strange, but my family is very poor, so I was sent here to earn money in their shop.  When I was born, my parents couldn’t take care of me but didn’t want to lose me by putting me up for adoption.  When I was a little over a year old, I came here and I never left.”
“Do you still have a connection with your family?  Do they live nearby?”
“Non.  But they do come to visit on the occasion, mes deux soeurs et mes parents.  It would be nice to be able to live with them, though.  I miss Violette et Daisi.”
“Tes soeurs?”
“Ouai.  I feel like living apart from them has made it difficult for us to really get to know each other.  I mean, we still fight like sisters, but they are much closer to each other than they are to me.”
“I had sisters once, but being the youngest made it difficult to be heard in a group of four.  I was much younger than they were, and I was always left out because of my age.  They babied me for years and refused to see the talents I had, so as soon as I was old enough, I left them behind.”
“That’ so tragic.  Je suis désolée.”
“I don’t need any pity.  I chose to distance myself from them, and I was able to become a much greater person because of it.  To this day, it remains the best choice I ever made.”
“Do you ever miss them?”
“Non.  I have seen them on the occasion, but they treat me no differently than they did before and I refuse to let myself be surrounded by such types of people.”
“As long as you still stand by your decision and are happy because of it, then it was probably the right choice.  Although, it does no good to regret the past because there isn’t a thing you can do about the past.  The only thing we can control is right now, and choosing to be happy is the best thing anyone can do.”
“Oh, I am very happy.  I made some choices in the past that are very soon coming to completion and will indeed make me happier than I have felt in a long time.”
“Well, if someone else is happy, then I can’t help but be happy for them.  It was nice to meet you, but I have to go now.  Mon ami is teaching me how to drive.”  Rose turned and left Mallorie alone with her thoughts.
As soon as she was out of sight, Mallorie reached deep into the recesses of her energy and pulled enough strength to create a spell sending her back to her fortress au Château à Cahaignes.  That girl’s optimism really sucked all her energy, but it was worth it, finally knowing where she was after all this time.  Thinking of how weak she had grown after losing her special vein of negative energy made her sick.  That Rose was the cause of every problem she had encountered within the past almost 20 ans, and dedicating her remaining strength toward ridding the world of her problem could not go to waste.  She still had so many plans for her own sisters, and losing her powers was not an option.  Not after they altered her spell on Rose.  That was unforgivable.  Her only solace came with the thoughts of how the curse still lay upon Rose and still could throw a dagger between the two families long enough for her to regain her former strength and exact her revenge.  As she hid in the darkness of the abandoned château, those thoughts brought her enough comfort to wait.  The knowledge that Rose was spending time in a car as she learned to drive brought back a spark of eager jubilation.  Yes, her choices from the past were very soon coming to completion.

Thanks for reading!
~Alyson