Skip to content
3rd March 2015 alliemay
Back in October, I wrote a post about my friend, H. L. Burke.  Since October, she’s been working on another book. It’s different from what she usually writes, but she had a lot of fun with it. It’s called Thaddeus Whiskers and the Dragon. 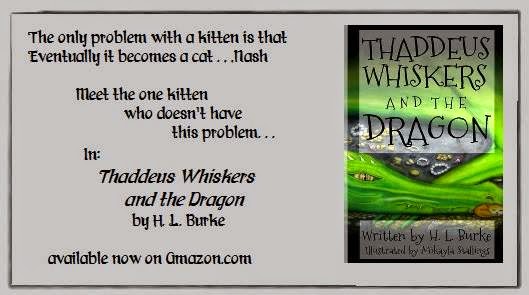 She typically writes YA fantasy novels, but followed through with an idea she had for a Middle Grade story following Thaddeus Whiskers, the enchanted kitten of a princess.  I read through this book on Scribophile, and it was so full of personality.  I’ve never read something that so perfectly captures the attitude of a kitten or a dragon. It was such a fun read, and it was impossible to be in a bad mood after exploring with Thaddeus and Grandious.
Available from Amazon–

Thaddeus F. Whiskers is a pampered palace pet, a kitten enchanted to never become a cat. Princess Clarice loves him, for in the entire kingdom, for there is no other kitten as cute or as clever. He leads a life of cushions and cream until a wizard’s “gift” results in his banishment. Determined to make it back to the princess he loves, he escapes into the wilderness where he discovers the lair of a dragon.

Grandious, the dragon, doesn’t care about anything besides himself. He wants to be left alone with his treasure. However, there is something about Thaddeus that has him entranced. He finds himself opening his home and his heart to the little cat.

Thaddeus is a small creature in a big world. Between him and his beloved Princess stand conniving wizards, would-be-step-mothers, and rampaging rats. However, when danger threatens both Clarice and Grandious, Thaddeus won’t allow his size to get in the way of saving his friends.

For anyone with (or without!) kids who like dragons or kittens or just reading, I highly recommend this book.