It’s been a while since my last post, so I figured it was time for a quick update as to what I’ve been doing-
I started a new job! Whoo! I stopped nannying back in December, and applied a couple of places, but because of my trips to the doctor and Physical Therapy, I didn’t really focus on looking for a new job. About a month ago, a relative called and offered me a position working as a scheduler from home. Basically what I do is organize a list of businesses by location, make phone calls to schedule appointments, and send out reminder emails. It’s boring, but I get to work from home! I love it! I’m on my own schedule and I can work in my pajamas. Even though the company I work for is based here in California, I can continue working when we head back to Utah in August.
I started writing again. A little. Kinda sorta. Well, I sat down to work on revamping the ending of Powerful chapter 7 when I got interrupted and couldn’t remember the end of the sentence, “I used to think…” so I’m still working on it. But I’ve gotten the pen and notebook back out, which means I had some downtime. After another week of work (and seeing my best friend again on Saturday!), and Husband of Mine starting his internship, I’ll actually be on a regular schedule which means I’ll have more time for writing.
I’ve been crafting! I learned to crochet. I tried to take up knitting a while ago, but never really got into it. Crocheting is only slightly different, but it seems to go a lot faster for me. When I finish my projects, I’ll post pictures of them.
I also started reading a new book series. 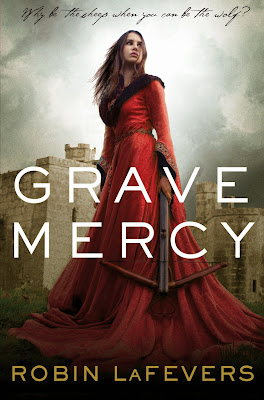 Grave Mercy by Robin LaFevers is the first book in the His Fair Assassin series.
Seventeen-year-old Ismae escapes from the brutality of an arranged marriage into the sanctuary of the convent of St. Mortain, where the sisters still serve the gods of old. Here she learns that the god of Death Himself has blessed her with dangerous gifts—and a violent destiny. If she chooses to stay at the convent, she will be trained as an assassin and serve as a handmaiden to Death. To claim her new life, she must destroy the lives of others.Ismae’s most important assignment takes her straight into the high court of Brittany—where she finds herself woefully under prepared—not only for the deadly games of intrigue and treason, but for the impossible choices she must make. For how can she deliver Death’s vengeance upon a target who, against her will, has stolen her heart?
So far, I’m completely enchanted by the set up. I love the idea of a bunch of unassuming yet completely deadly female assassins running around 15th century France. It’s definitely not your traditional romance novel. You can follow my progress on Goodreads.
That’s all for now! Hopefully I’ll be back soon. That’ll mean my life has finally returned to normal.
~Alyson