I announced a few weeks ago that I was planning on having some guest posts on my blog. I want to hear about different writer’s routines! But instead of all that edited advice we always hear from famous people, I want it to be honest. What do you actually do when you’re trying to write? How long do you actually spend writing? And if you say you don’t get distracted, then we know you’re lying and we’re all judging you for it.
But it doesn’t seem fair at all to embarrass everyone else and not myself, so I’m giving you my daily routine as an example. Starting with when I woke up, what music I listened to, and an hourly play by play of my day so you know how often I was distracted and interrupted. 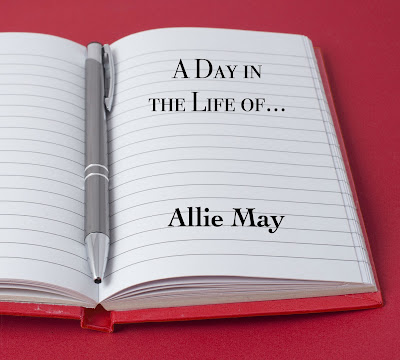 I woke up this morning at 11 am. Unfortunately*, I forgot to set an alarm last night. *Not really unfortunately because I hate alarms and I hate mornings because they are evil. So I wake up and the first thing I do is grab my phone because I need to engage my brain or else I’ll fall back asleep. So I spent 15-20 minutes playing on my phone, checking emails, etc. Then, I’m finally awake enough to get up. I let the dog out, and she DEMANDS morning cuddles. 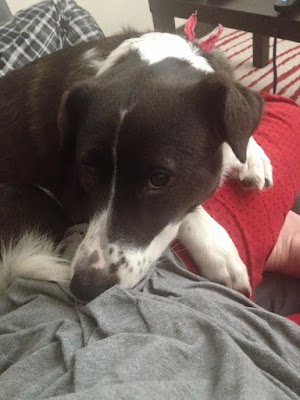 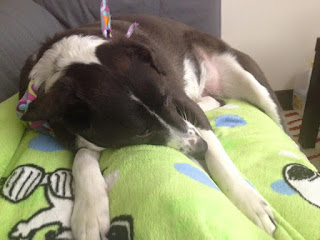 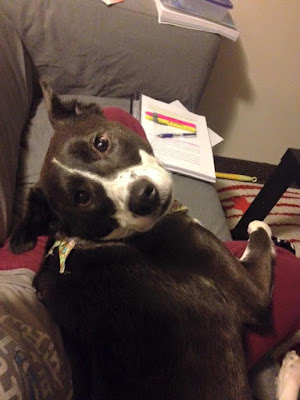 I’m serious. She won’t let me do anything until she’s been sufficiently loved. It’s been that way since she was a baby. 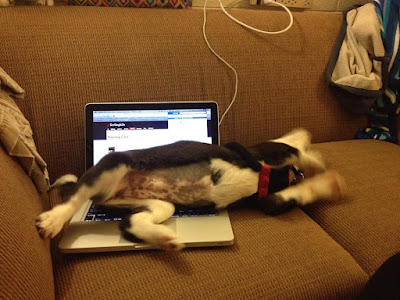 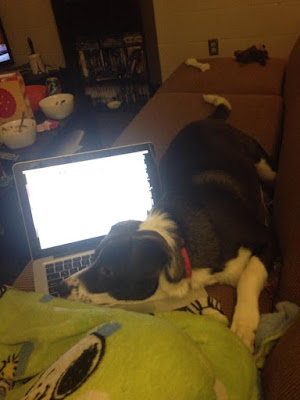 So eventually she’s been sufficiently cuddled and finally relents. So I spend some time on my computer checking social media- Twitter, Facebook, Pinterest, Blogger, and Scribophile. That can take anywhere from 20 minutes to an hour depending on how well the internet is working and what’s been going on. After that, I finally get ready for the day. But even that’s not without interruptions. 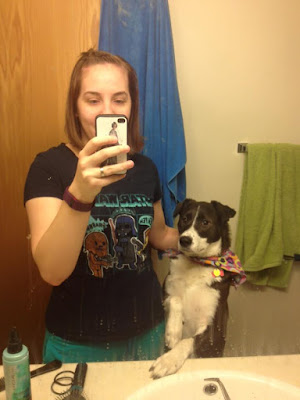 She’s very needy!!! Also, note the Star Wars shirt and sweats. I’m all for dressing comfy. Leggings are also a favorite of mine.
Okay, so I’m dressed by noon (I AM NOT A MORNING PERSON!!!!) and it’s time to eat. Typical lunches for me- Costco chicken bakes, a sandwich (ham and cheese with olives!), or leftovers of whatever we had for dinner. Today, it was a sandwich. While I eat, I Netflix a 20 minute tv show (usually Phineas and Ferb, but today it was Dreamworks Dragons: Race to the Edge). If I watch a longer show, I get distracted and forget to be productive. Seriously, it’s a science.
So the show’s ended and I’ve eaten. Time to crack open a Dr. Pepper (my favorite form of caffeine and a necessary writing tool!) and get to work. Depending on my schedule (pronounced Shed-yule), I’m either editing Powerful or critting on Scrib. This week my schedule’s been thrown a bit because I’ve been outlining a new project (details still to come), so a lot of my time has been dedicated to that recently.
But not today. Today I’m being a good girl because I’ve done pretty much nothing this week (except work on this other project). I have to relocate from the couch to my super comfy, reclining writing chair (which is also a junk pile on certain days) and away from the dog. I pull out my manuscript, my notebook, my highlighters, and my sticky notes (which were buried under the couch thanks to the dog!) and get to work. And by get to work, I mean scroll through some more social media (it’s #1lineWed on Twitter, okay? Give me a break!).
By now it’s 1, and with another sip of Dr. Pepper, I’m actually ready to write. I turn on Spotify. I’ve got a couple different playlists depending on my mood. I’ve got movie scores (my favorites are How to Train Your Dragon 1&2, Captain America, and (of course!) The Force Awakens) for when I need to seriously focus on wording. I’ve also got playlists labeled Words and No Words which are basically my favorite songs with and without words (again, depending on my mood) and they change quite frequently. Currently my favorite writing music is Phillip Phillips, Of Monsters and Men, The Force Awakens soundtrack.
Today, I pick Words because I’m not focusing on wording or any major specifics as I edit. I open up my manuscript to the beginning today because I’m focusing on what changes would need to be made to each chapter if I delete a character. I get to work on the first chapter with the help of my handy Snoopy writing stickies. 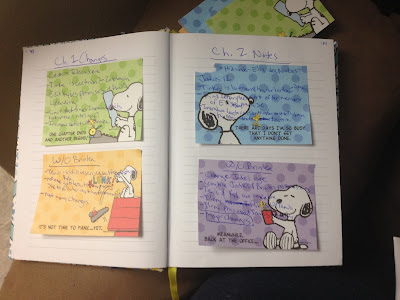 It’s a mild struggle to read my own writing, but in the end, I make some progress! Yay!
Until the dog approaches me. We blink at each other a few times before she turns and stares at the wall. I watch her, trying to figure out what she wants, and suddenly she jumps at a glint of light on the wall. I realize that it’s the reflection off my phone, so I start to move it around and she gives chase.
I waste a half hour of my day doing that because I’m easily distracted. I finally put the phone down, and proceed to laugh at the dog who curled up so she could stare at the wall and wait for her dot of light to come back.
Eventually, I do get back to work and I make it through quite a bit of chapters. Only one chapter seems to create a bit of a problem if I delete this character. It’s a chapter I already didn’t like and it has a lot of problems to work out, so I mark it and move on.
It’s 3pm now, so I go back on the internet for a bit. I’m scrolling through Scribophile, Facebook, and back to Twitter. On Twitter, I see my friend post a new blog post and suddenly it dawns on me that I haven’t written a blog post yet today. *CRAP*
I hold off a mild panic attack and drink more Dr. Pepper. Then, I remember that I’ve been postponing this exact post because I was working on outlining my new project. *Ding Ding Ding* We have a winner! So I create my little “A Day in the Life of…” image (as seen above), and I get to work! It’s easy to talk about myself because I’m so amazing and talented and funny. *oh stop it!*
Husband of Mine texts me from school so I waste some time talking to him until he disappears again. It is at this point that I realize I forgot to walk the dog. I debate taking her out now, but she’s asleep on the couch, so I decide not to interrupt her.
Except a certain song comes on Spotify, so she sits up and howls along. (It happens often. Check out my Youtube channel for more.)

And then she promptly goes back to sleep. She’s a weirdo.
It is now 4:30 and I’m losing energy and focus. I scroll through the internet yet again, hoping something new and exciting will pop up on my feeds, but alas, nothing new. I need more Dr. Pepper.
I’m currently on a diet, so my only form of sugar comes in either Dr. Pepper or the Lucky Charms I eat around 10 pm. I’m hungry. I wonder what the heck we’re supposed to have for dinner since Husband of Mine did the meal planning on his phone and never gave me the list.
I realize just how off topic I’ve gotten, so I return to my editing. Yay. *jazz hands* I switch my music to The Force Awakens to hopefully get some more focus.
Husband of Mine usually comes home from school around 5 or 6. Then, we eat dinner. Today it’s a Chicken and Rice dinner that is amazingly delicious and we have it all the time. Our most common dinners include Wendy’s, In-N-Out (MY FAVORITE), and pizza. We watch tv during dinner too. Currently, we’re rewatching episodes of Psych (my favorite show!) because it’s awesome and hilarious.
After dinner, Husband of Mine works on homework while I get some more writing/critting done. Tonight, I keep working on scenes without this character.
Tuesdays, Thursdays, and Saturdays are gym days. Husband of Mine and I usually go in the late evenings (because I’m a night owl). I can’t run on a treadmill because of my tendonitis, so most of my time there is spent cycling. But cycling doesn’t take up a whole lot of my brain power, so I write on my phone will cycling. Yesterday, I spent that time figuring out which major scenes would be most affected by me deleting a major character. Previously, I was outlining my new project. Next time, I plan to work on character sketches for my new project (and also the character who will take the place of the one I’m deleting).
Usually, I’m most creative in the evenings. One of the reasons why I sleep in late in the mornings is because I’m up late at night working. I’ve always been more creative at night. In high school I used to get in trouble for staying up late to write. But now I’m an adult, so HA. I often stay up until 2 am, and I can get more work done at 9 pm than I do all day.
And that’s my day. Some days I’m more distracted than others. And some days I’m super, crazy productive. I’m prone to migraines, so usually how badly my head hurts will determine how much I get done in a day.

Some of my weird habits:

And that’s me! Now, it’s your turn! I want to hear about you, your weird writing quirks, and how your plans to write may or may not always work out. So comment on this post, or find me on Twitter or Facebook if you want to be included in these guest posts. New posts will be shared every Monday starting in February!
~Allie

5 thoughts on “A Day in the Life of…Allie May!”