I forgot to blog yesterday because I was busy doing a million and a half other things like eating cereal with sour milk and forgetting to turn on the washing machine when I put in laundry. Yeah. That about sums it up.
So today I’m going to do a quick free write thanks to my wonderful Writing Prompts Pinterest board! Yay! I love Pinterest!
I’m once again using bits and pieces of my next project “A Fairy’s Tale” to try and spark some ideas as I try to plot out the end of the story. Deamonne is a temporary term, but the more I use it, the more it grows on me.
Here’s the prompt- 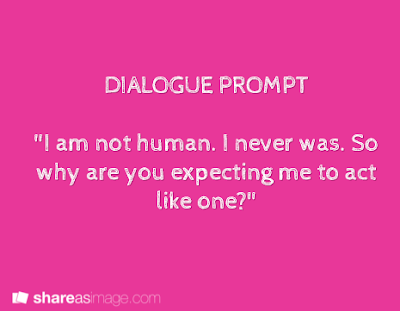 “You want me to kill him?” He raised an eyebrow.

“Is that really such a surprise? We’ve talked about this before,” she snapped.
“It just seems rather sudden…”
She cut him off. “I didn’t ask your opinion!”
“No, of course not,” He muttered.
“He has interfered with our plans too many times, Vion.”
“Yes, but he could still be useful to us.”
“We’ve run out of time. King Callister has come of age and taken full control of the throne. He cannot be controlled anymore.”
Vion paced, contemplating all that she planned. Killing another royal was dangerous. Getting close enough to him would be difficult. The consequences were unpredictable. He sighed. “Your conscience is not at all conflicted about this?”
“I am not human. I never was. So why are you expecting me to act like one?”
“You were human for a brief moment.”
Her eyes flashed. “I was never human. When I foolishly married a human, I lost everything. I was an empty shell. I never gained your kind of humanity. Why do you think it was so easy for me to become a Deamonne? I had no soul to trade for these kind of powers.”
Vion placed a hand on her arm. “Do you really think that killing Callister will finally make you happy?”
She pulled away and glared down at him. “Yes.”
“You’re lying.”
“And?”
“And I’ll still do it, for you. But I want you to remember that there was a brief period of time when you were happy. Many years ago.”
She felt a pang, deep in the hollowest part of her soul. “Don’t. You told me to become a Deamonne. You knew what would be lost.”
He shook his head. “I wanted you to regain your Spirit powers. This,” he gestured to her, “is not what I wanted. This isn’t what you wanted.”
“It’s what I want now.”