First, a quick announcement- I was interviewed by my good friend, Krisna, as part of the Blog World Tour. You can see that interview here!
Now, as I mentioned last week, I started working on writing my first query letter for Powerful and I’ve received a lot of feedback from my writing group. It’s really been an interesting learning experience for me. 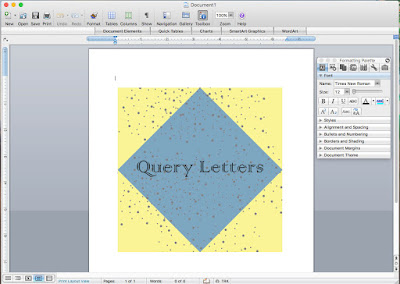 There are a few different parts of a query letter, and it can change between different agents and publishers. The most important thing is to Look carefully at submission guidelines.

The first step that I did when writing my query is to come up with a logline for your story. Now, a logline is not the same as a tagline. A tagline is the quick, snappy subtitle for a movie. But that’s not what you’re writing. A logline is a one to two sentence summary of your entire book.
Now you might be asking, “Why would I need a one or two sentence summary of my entire book?” Because before you’re ready to query, you need to know how to pitch your novel, and writing a logline will help you practice a quick “elevator pitch” for your novel.
My logline for Powerful is-
Her parents are in prison, her brother is on the run, and her powers are out of control. Now Crown Princess Kylanore has to restore balance to the government her parents corrupted.
It introduces the main character, the problems she faces, and her goals for the story. When you look up how to write a logline, you’ll get lots of different advice on how to do it, and there really is no right way to do it. Just say what the most important stakes of your story are.
Your logline may or may not be used in your query, but it’s really good practice for your story blurb, which will be in your query letter.
Your blurb is basically what you’d put on the back of the book to get people to read your book. And I’m still working on this part. Apparently it’s a lot easier for me to condense than it is to add, and I’m struggling with filling out both my blurb and my synopsis.
It’s easier if you start with some questions (and I took these questions from Spitfire and Sparrow’s video on pitching your book because Sparrow ended up with 5 agents asking to represent her, so obviously she did something right with her pitch.

Here are my answers-

Now that I’ve answered those questions, I have to decide which pieces of information I can actually include in my query. I chose to talk about her parents, her powers, her brother, and the corrupt Council of Four, because those are the most important plot points of the story.
So I wrote out a blurb, and it ended up being really short. It was only about three sentences, and didn’t tell enough about the story for an agent, publisher, or even a reader to want to know more. So I revised. And edited. And rewrote. And I’m still fine tuning it, but the blurb is definitely better than it was before. Make sure that your blurb explains why your story is unique. For example, my story deals with racism in a fantasy world, which I think is especially pertinent in today’s society.
The next part of your query letter is to include the word count (rounded to the nearest thousand words, I believe), genre, and intended audience. You should also include why this book is a good fit for the agent/publisher.
Don’t forget to include a bit of your author bio, and explain why you are uniquely qualified to tell this story. If you have previously published writing, include it! Some people say only include if it’s recent or matches the genre, but some people say to include anything you have if your published works are limited (like mine). In the end, it’s your decision on what to include.
Lastly, don’t make your query letter formulaic. Don’t just stick the logline on top of the blurb on top of your author bio. Take this opportunity to share your voice. Relax a little. If you have a relationship to the publisher/agent or you met them at a writing conference, include that so the people reading it will have a connection with you.
Often times, publishers and agents will ask for a synopsis or a certain amount of your manuscript in addition to the query letter, so don’t forget to include those!
If you’re struggling to write a query letter, write a few different styles in a few different voices. Write one as your character! Write one as a character from your favorite movie! Get out of your mind and try to relax. Querying takes practice. Don’t be afraid to let friends read it or to accept feedback, just like any other writing you do.
~Allie