It’s been a busy week. Sorry that I’m a few days late with this post! But better late than never, right?  Didn’t have time for a lot, but I did write this short story, so I figured I’d share! 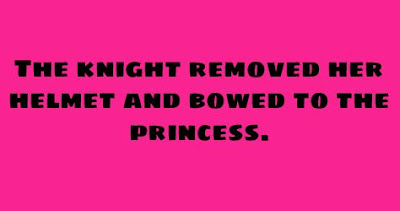 The king held up his arms and silenced the cheering crowd. “We have our victor! Please, step forward and reveal your identity, noble knight.”
The princess yawned.
Her lady in waiting nudged her. “Perhaps he’s handsome and rich!”
“Yes, because that would be a refreshing change from all the others who have come to win my hand,” she grumbled.
The knight stepped forward and removed his…no, her helmet. Long brunette curls erupted from the helmet and settled around the victor’s waist. Finally, she looked up and smiled. “My princess.”
“Mother?” The princess jumped out of her seat.    “Helenia?” The king frowned.
After a moment of confusion, the crowd slowly bowed to their long-lost queen.
“Helenia, what do you think you’re doing?” The king’s face turned an odd shade of purple.
“Competing in the tournament. Whoever wins can take the princess’s hand in marriage, correct?”
“Those were the rules.”
“Well then, Leopold, I would like to make a deal with you for the princess.”

“What’s going on, Mother?” The princess took a step forward.
“Hush, Florie,” Leopold growled to his daughter. “I know what you’re doing, Helenia, and I refuse.”
“You refuse to honor your end of the tournament? In front of your people? Leopold, they won’t be happy about that.”
“Mother, what are you doing?” Princess Florie stepped forward again.
King Leopold took her arm in his hand. “I said, hush!”
“Ouch! Let go of me!” The princess struggled against his grip.
Queen Helenia raised her sword, the sword that defeated many a knight in the tournament, and stepped toward her husband. “Let the princess go.”
“Or what?” The king snarled.
The queen raised an eyebrow then shrugged. “I don’t have to defeat you. She will.”
The king’s brow knit together then he glanced down at his daughter.
Florie’s eyes grew darker as she grew angrier. “You can’t hold me prisoner. Everyone here knows you only held this tournament because you’re afraid of me. Of us. That mother might train me and I might be stronger than you. Well, if you’re so afraid then you should’ve have married a harpy.” Her pupils grew to fill her whole eyes with darkness and black, leathery wings sprouted from her back. She flew up and kicked her father in the face.
Stumbling backward, he released the princess’s arm and fell rather unregally on his backside.
Princess Florie spun around and landed gracefully next to her mother where she mutated back to her human form. “You’re too late. Mother did train me. And I want to keep training with her. I want to know what I can do with these abilities.”
“How…” Leopold sputtered.
“Locking me in a tower doesn’t stop me when I have wings.”
Queen Helenia sheathed her sword. “You have no power here, Leopold. Now let this go before we leave this kingdom kingless.”
“Father,” Florie reached out a hand toward him. “I’ll be back, I promise, but I want to do this first.”
He swatted her hand away. “I would never father such a horrid creature as yourself.”
Florie put a hand to her mouth to stifle a sob.
“Leopold,” Helenia’s voice warned. “Don’t do anything you’ll regret.”
The king slowly helped himself to his feet and stared his wife right in the eye. “Get out of here, both of you. You betrayed me. You betrayed my people.”
“Our people.” Quicker than the human eye could process, Helenia’s sword skewered King Leopold’s gut.
Gasping, the king tried to speak.
Queen Helenia cut him off. “These people are mine. These people are our daughter’s. You do not own them.”
“How dare you…”
Helenia pulled her sword out of her husband’s stomach and turned to face the crowd. “People of Drizar, I free you from the tyranny of this man. King Leopold tried to convince Drizar that harpies are evil creatures of darkness, sent to snatch those who rebel against the king from their homes and torment them eternally. In reality, we are like you humans. We simply wish to be accepted for who we are. We were once considered to be kind wind spirits who blessed sailors on their voyages, and guided those who were lost back home. I would like to revive that believe by guiding you all back to your rightful home here under a new rule led by me and my daughter.”
The people, once afraid, now cheered for their queen who had freed them from their oppressive king.
Queen Helenia smiled. “My first step as your leader will be to rename this kingdom in honor of a new beginning. I name this land Florin, after my daughter, the one who gave me the courage to stand up for myself and others who were oppressed.”
The people cheered again and began chanting, “All hail Queen of Florin!”
Princess Florie turned to her mother amidst the chanting crowds. “But Mother, you told me that harpies were dark beings, destined to create chaos and lead people to destruction.”
The queen smiled, her dark eyes glinting. “We are, my child. We are.”
Princess Florie grinned. “How long do you think it will take them to realize that?”
“They’re humans. They’re naive. It could take them years to realize what we’ve done.”
“Mother, you’re positively evil.”
“Thank you, Florie.”
~Allie