Alright, so I’ve got a few quick things to go over today, including Halloween, NaNoWriMo, and a checklist of my goals. Here goes nothing-
For those who haven’t followed my blog in previous years, I LOVE HALLOWEEN. I dress up every year because it is my favorite part. Pretending to be someone else shouldn’t be reserved for little kids. We all need to exercise our imaginations and take a break from the real world.
That’s why I write fantasy novels. And that’s why I love Halloween. Here and here are my posts from previous years. I usually dedicate a lot of time to making costumes. Unfortunately, this year there were a few hiccups-namely moving and cleaning out a new living space, still fighting a cold, Husband of Mine fighting a cold, etc. So, we didn’t get super creative this year, but I still had fun.
Two weeks ago, Husband of Mine (who works for Disney Imagineering as a ride engineer) manage to snag us tickets to Mickey’s Not-So-Scary Halloween Party at Disneyland. This is a special event where the park closes early except for those with special tickets, and there’s trick-or-treating throughout the park and a special fireworks show and a special nighttime parade. We dressed up for the party (of course!) and partied all night long (or at least until the park closed at 11 pm) 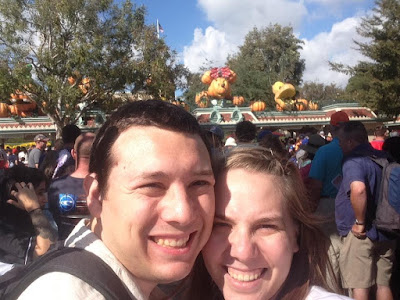 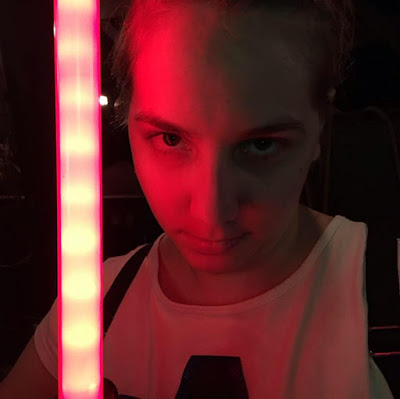 Yes, apparently I am a sith lord. Awesome, right? About a week after this party, we went to another Halloween party at our church. Husband of Mine was running late coming home from work, so rather than putting on his Jedi costume (which I NEVER got a picture of), he decided to go as an Imagineer. He already has his name tag on, so he threw on a pair of Mickey ears (yes, we have like 3 of them lying around the house) and we went to the party. 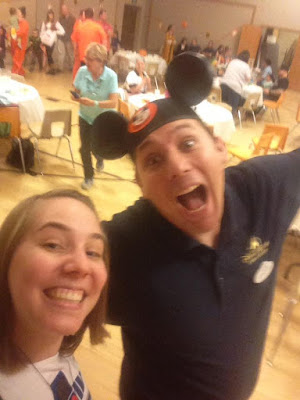 He was very excited, and everyone loved it because they all know he works there. It was a lot of fun.
Last Saturday, we spent the evening at my parents’ house and carved pumpkins. Here’s mine. 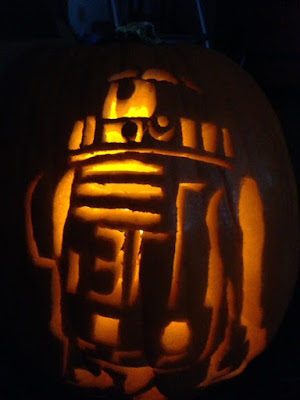 Are you starting to see a pattern now? Here’s my costume (it was a birthday present)! 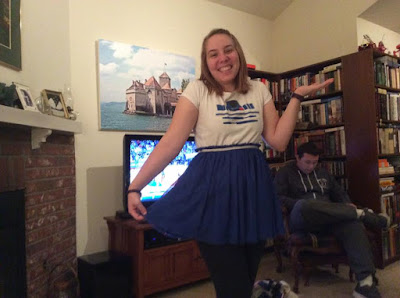 I went as R2-D2, my favorite Star Wars character! Yes, I had a lot of fun twirling around with my tulle skirt as I beat up people with my lightsaber. I love Star Wars. Unfortunately, Husband of Mine was too sick on Halloween to actually dress up in his costume, so he’s sitting in the background there as a gray blob, his third costume for the year.
Oh, and here is a bonus picture of me with my new measuring cups, because as an adult, I have to make my adulty things exciting. 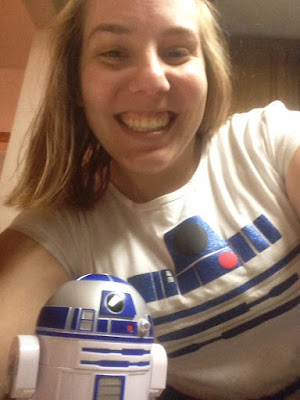 Yes, my R2-D2 figure is made of measuring cups and spoons! Look at us! We’re so adorable. 😀
So Halloween is over now. Do you remember what that means? NANOWRIMO time!!!!!

Unfortunately, I am not really at a place to do NaNoWriMo this year. In case you forgot, last year, I finished the first draft of Powerful for NaNo. It was awesome. Currently, I’m working on editing the third draft, but I’ve also got a more pressing project that I am finalizing RIGHT AT THIS VERY MOMENT that I promise I will announce very soon (hopefully next week!) because it is very exciting for me, and I know you all are waiting for that announcement. So next week I can go into slightly more detail on that goal, but for the time being, I’m going to announce the rest of my November “NaNo” goals.

Those are my two big goals for November. It may not seem like much, but it’ll still be a lot of work. I’ll update you with my progress when I can!
My longer term goal is to be ready for NaNoWriMo next year. I want to do the full thing, since I’ve only done half NaNos in past years. I want to be able to dedicate all day, everyday to my writing and I want to be able to participate in the local write-ins to connect with other authors in my area. It sounds like so much fun, but this year I have more pressing priorities that are in the way. Like a full time job. I know, adulting stinks.
Anyway, that’s my update for now! Stay tuned for my big announcement coming up soon! And prepare for December 7th! Why? No reason… 😉
~Allie