It’s time for another guest! You may remember Heather Hayden from a previous appearance on my blog. 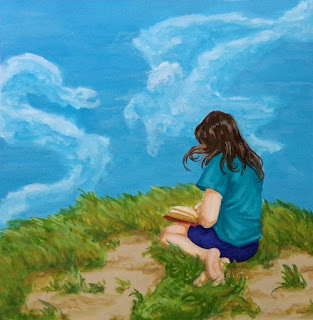 Though a part-time editor by day, Heather Hayden’s not-so-secret identity is that of a writer—at night she pours heart and soul into science fiction and fantasy novels. In March 2015 she published her first novella, Augment, a YA science fiction story filled with excitement, danger, and the strength of friendship. She immediately began work on its sequel, Upgrade, which continues the adventures of Viki, a girl who loves to run, and her friend Halle, an AI. You can learn more about Heather and her stories through her blog and her Twitter, both of which consist of equal amounts of writerly things and random stuff she’s interested in.

Q: Tell us about your writing process and the way you brainstorm story ideas.

A: I don’t really so much brainstorm ideas as have an idea pop into my head that refuses to leave me alone until I write it down. My normal writing process is something like this:

2. Write down idea before I forget.

3. Write first draft of idea. (This step sometimes happens in a few hours or a day for a short story, or takes as long as a month or several months to complete.)

7. Call it done and hit Publish.

This is a very basic version, obviously. It tends to be a bit more chaotic, and involves more ideas popping up at random times that I have to write down (and occasionally take a side trip to pursue because it’s so alluring.)

Q: Do you proofread/edit all your own books before publishing, or do you get someone to do that for you?
A: I edit my books with the help of many wonderful critiquers from Scribophile and other contacts I have. I get help proofreading the final draft from the same sources—after all, once I’ve revised the same page fifteen times, I’m going to miss the tiny typo that changes the entire meaning of a sentence! I haven’t considered using professional resources yet; for one thing, I can’t afford them at the moment, and I also have found that my current method works very well, which means money I would spend on an editor could be spent on promotion, book covers, etc.
Q: Is there anything you find particularly challenging in your writing as far as content?
A: Sometimes my science fiction novels get a bit technical, and then I need to do research to make sure I’m not making any horrible mistakes in terms of details or terminology. I also have a hard time keeping track of what places and people look like—but for that, I have spreadsheets and Word documents for organizing and recalling descriptions! I also have difficulty writing fight scenes (visualizing and describing the action), although I think I’m getting better at it.
Q: Did you come across any specific challenges in writing Upgrade? What would you do differently next time?
A: Next time, I would probably not let myself drop the project for such a long period of time. A combination of being burned out and depressed led to me setting it on the backburner for far too long. Next time I’m writing a sequel, I’ll start it as soon as I finish the first book, so I still have the characters and setting clear in my mind, and just get the first draft written. After that, it can sit for a while before I edit it.
Q: What are your ambitions for your writing career?
A: My long-term goal is to make enough from my writing to live comfortably (and be able to travel!). That’s definitely a few years down the road right now, I think, but my sister and I have a lot of plans for stories we’re going to publish over the next few years, and we’ll work on growing our fanbase as we do so. Plus I also have some plans for collaborations with other authors, including an anthology of fairy tale retellings that I’m super excited about! *winks conspiratively*
*Winks back, then coughs* I mean, I have no idea what collaboration you’re talking about.
Thanks for joining us, Heather! See you on the rest of the Blog World Tour!
~Allie