I was not planning on doing another blog post this week (since I’ve already surpassed my weekly quota and you people are probably sick of hearing from me about banned books), but then I found out about another book that’s been banned and I knew I needed to post this since it’s banned books week.
I’m sure everyone has heard of John Green’s bestselling book (and now a movie), The Fault In Our Stars, or TFIOS as it has been nicknamed.  If for some reason you’ve been living under a rock in Antarctica and haven’t heard of TFIOS, here’s the blurb.

Despite the tumor-shrinking medical miracle that has bought her a few years, Hazel has never been anything but terminal, her final chapter inscribed upon diagnosis. But when a gorgeous plot twist named Augustus Waters suddenly appears at Cancer Kid Support Group, Hazel’s story is about to be completely rewritten.

Insightful, bold, irreverent, and raw, The Fault in Our Stars is award-winning-author John Green’s most ambitious and heartbreaking work yet, brilliantly exploring the funny, thrilling, and tragic business of being alive and in love. 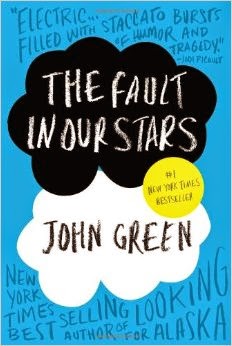 And just because, here’s another blurb.

The story is narrated by a sixteen-year-old cancer patient named Hazel Grace Lancaster, who is forced by her parents to attend a support group where she subsequently meets and falls in love with the seventeen-year-old Augustus Waters, an ex-basketball player and amputee. The title is inspired from Act 1, Scene 2 of Shakespeare’s play Julius Caesar, in which the nobleman Cassius says to Brutus: “The fault, dear Brutus, is not in our stars, / But in ourselves, that we are underlings.”

Now without giving away any spoilers, this book is about life, death, and love.  It’s very real.  The book is meant to talk about how things happen in the real world.  It’s incredibly blunt, because it’s supposed to be.  The whole point of the book is to force readers to realize that we are only human.  We can only do so much. And if something outside of our control happens, then we just have to deal with it.  Also, you’ll notice that this book is listed off to the side as one of my favorite books.  I know a ton of people who have found comfort in the pages of this book because it realistically relates to the pain and suffering of someone who has cancer, and those close to someone who has cancer (or a debilitating life illness).
Yes, this book has foul language in it.  But I heard much worse language walking through the halls of public middle and high schools.  Yes, this book discusses sex.  But compared to some of the popular programs on tv, this book was very clean.  Yes, this book discussion death.  But shouldn’t we as humans learn about death since it is unavoidable and eventually every person here will have to face it?
So why did middle schools in Riverside ban this book?  Because it presents life, death, and love in a way that is too realistic for that age group.
Anyway, I’m not going to present my opinion about the banning of this book, because if you’re any good at inference and reading context clues then you’ll know my opinion.  I wrote up this blog post just so I could quote the author of this work, and his opinion on it being banned.  Here’s what John Green posted on tumblr.

I guess I am both happy and sad.

I am happy because apparently young people in Riverside, California will never witness or experience mortality since they won’t be reading my book, which is great for them.

But I am also sad because I was really hoping I would be able to introduce the idea that human beings die to the children of Riverside, California and thereby crush their dreams of immortality.

And I’ll leave it at that.  Happy Banned Books Week everyone!
~Alyson