Recently, I’ve been wrapped up in major edits for Powerful. I printed out my first draft of the manuscript and I’m going through it on paper with my pink highlighter (for things that that need to be changed) and my yellow highlighter (for things I like and want to keep) while I’m penning comments and questions on sticky notes. While I’m doing that, I’ve been critiquing my friend’s third draft of her novel on Scribophile.
Basically, I’ve been in crazy editing mode for weeks. While it’s nice to finally let my inner editor loose on my writing so I can tear it apart and make serious improvements, I do miss just being able to write without worrying about perfection.
So today I’m shutting off my internal editor and doing a free write. This is a prompt I found a long time ago, and I’ve been saving it for a time I need to get out of my MC’s head and take a look at my story from a different perspective. I get to write from a completely new voice. This will be a lot of fun for me.
Here’s the prompt: 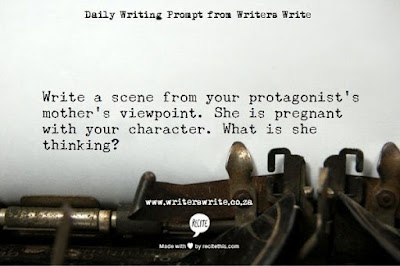 Rona stood at the edge of the castle grounds, staring off into the distance. Everything was so quiet and peaceful.
Footsteps shuffled behind her.
She turned to find Zael standing a few feet away, Elion holding his hand. She glanced down at her son. “Ready to go?”
His four year old excitement got the best of him and he started to bounce. “Yes, Mother.”
“Then let’s go!” She waved her arm and he skipped off, followed closely by a nursemaid.
“Is everything alright?” Zael placed an arm around his wife.
“Yes, but I’m afraid the baby is making me quite ill.” She rubbed her enlarged, pregnant belly. “It’s different than last time.”
“How so?” He guided her forward and the followed their son toward the beach just a short walk from the castle.
“Before, all those concoctions Nodah made prevented me from throwing up so that the powers would settle with Elion before he was born. I don’t have that luxury anymore.” She sighed and brushed a strand of long, blonde hair out of the way.
“I will have the physicians look into something to settle your stomach. After all, you are Tykra’s Queen and you deserve to be comfortable.”
“It’s not only that, though. There are so many questions I have for Nodah.”
“About the baby or about the possibility of the baby having powers?”
“What if the baby doesn’t have any powers at all? We’ve worked so hard to give Elion the best chance he has to protect himself and to protect us. It wouldn’t be very fair to this child to have anything less.”
“Rona,” Zael paused and took his wife’s hand, then pressed his lips against her knuckles. “Our baby will have everything it needs to live a happy life of ease whether it has all four powers, only one, or none at all. That’s why we’ve been planning this.”
“But what if Elion’s powers never come? We have to wait for another six years before we find out if Nodah’s alchemy even worked on Eli. And here we’ve been given another chance with another child, but Nodah says that it’s dangerous for me to drink more of his elixir.”
“I trust Nodah. I’d rather our children have no powers than risk losing you.”
She blushed. “Zael…”
“I’m serious. All our plans are for nothing if it means that I have to rule the Four Kingdoms without you. I’m doing this for you, for our children, not for myself. I will not having you risk your life and our baby’s life.” His dark blue eyes pierced through the foggy day.
They walked in silence for a while until they reached the sandy beach. A few chairs had been placed down by servants, and Rona and Zael took their seats while Elion ran through the waves, screaming and laughing at the cold water.
Rona rubbed her belly a few more times, concerned about the salty air and how it would affect her morning sickness, but after another minute it passed and she was fine. The breeze was refreshing. Years of planning to overthrow the Four Kingdoms meant most of their time was kept to themselves inside the castle. It was nice to be outside again.
“Mother!” Elion ran up to her with something in his hands. “Look what I found!”
“What is it?” She held out her hand.
He dropped an oyster in her palm. “I don’t know, but I found it in the water.”
“It’s an oyster. Look.” She carefully pulled apart the shell.
“You broke it!” Elion shouted.
“Sometimes, things need to be broken for better things to be discovered.” She poked around a bit, until a silver pearl popped out.
Elion’s eyes grew wide and his mouth popped open. “What’s that?”
“It’s a pearl.” She picked it up and handed it to him.
His little fingers grasped the shiny pearl as he examined it closely.
“Now you get to keep something much better than an old, useless oyster shell.” She smiled and tossed the oyster to the side.
He smiled at her, then showed it to his father, who praised his clever discovery. He grasped it in his chubby hand. “I want to give this to the baby.”
“That’s very sweet of you.” Rona ran a hand through Eli’s sandy hair.
“I want to give the baby a whole bunch of them!” He spread his arms wide.
“Well, you better find more of them!” Zael laughed.
Eli looked at them, then back to his pearl, which he gently placed inside a pocket on his tunic and patted carefully before returning to the ocean to hunt for more oysters.
Rona returned her attention to her protruding belly.
“Everything will turn out fine. Our plans will work. And our children will grow to be very powerful someday, as long as they have each other.” Zael smiled, before returning his gaze to Elion.