Today we’re in for a treat! I’m interviewing a very special guest author, Elise Edmonds! You may remember her as the Magic Writer, who helped me a lot with some world building questions for my writing a while back. 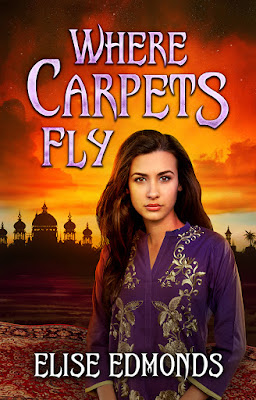 Recently, Elise published her first novel, Where Carpets Fly, and now she’s touring the world on her own flying carpet to tell us about herself and her book.

First things first, here’s a little about her book-

Sounds intriguing, doesn’t it? Well, if you want to know even more, we’re in luck! Elise sacrificed herself graciously volunteered to answer some questions!
A- First question, what inspired the idea behind Where Carpets Fly?
E- I’ve always been a fan of both children’s fantasy books and school stories – long before Harry Potter came into the world. I grew up on Enid Blyton and Narnia. So writing a fun, immersive fantasy story full of adventure but also including school and coming of age themes is basically me writing the book I wanted to read as a kid! It’s got a bit of everything I enjoy reading about.

Flying carpets have always held a fascination for me. There’s something exciting and exotic about them, and I wanted to capture that feeling in my world. I read a Diana Wynne Jones book about flying carpets (Castle in the Air – the sequel to Howl’s Moving Castle), and I can say she’s also influenced my writing.

A- I grew up on Harry Potter and Narnia. Those are definitely some of my favorite stories to reread when I need a bit of inspiration. The characters are so engaging and real. And speaking of characters, what is your favorite part about your main character, Elina?

E- My favourite thing in young adult novels is watching characters grow up. I love how Elina turns from a naive slightly-entitled teen, into a young woman who is resourceful, loyal and courageous. She becomes more aware of the world around her and her place in it, and starts to think about what she can do to help others, rather than what the world owes her.

A- I agree! I think having relatable characters who make mistakes and learn from them are what make young adult books so popular today. What was the hardest part about writing Where Carpets Fly?

E- This was my first novel, so to start with, everything was hard. With the help of my good friends at Scribophile (a writing critique site), I learnt how to create tension and how to plot, how to make sure character motivation was believable, and how to keep the readers turning the page. Once I’d started learning about the craft of writing and the construction of a novel, things began to proceed a lot quicker. But it was a steep learning curve at the beginning.

A- I’m in the same boat right now with my first novel! And even once you finish the first draft, where do you move forward from there? That’s why Scribophile is such a great resource for us writers! I’ve learned so much about writing from critiquing others, not to mention the countless friends I’ve made and feedback I’ve received in the past two years. But back on topic, now that you’ve finished your first novel, any plans for a sequel?

E- Yes, the sequel is in progress! All being well, I may be able to get it out by the end of the year. That’s the current plan, if life allows it to happen! All I will say for now, is that the second novel lets you into the heads of a couple of Elina’s friends this time around, as well, and follows their journeys as the political situation worsens.

A- Ooh, new perspectives and new troubles? I can’t wait to check it out! And now for one final, random question! If you could be any magical creature for a day, what would you be?

E- A dragon, for sure! I’d like to fly around all day, and swoop around breathing fire and cause a bit of havoc. Then I’d go home to a roast sheep and a night’s sleep on a bed of treasure in a cave.

A- Haha perfect answer! We writers love to wreak havoc! Thank you for stopping by, Elise!
If you want to learn more about Elise and her writing, check her out on social media- Facebook, Twitter, Goodreads, Instagram, and Wattpad. And check out her blog to see some of her other stops on her flying carpet tour!
~Allie

1 thought on “Where Carpets Fly by Elise Edmonds”