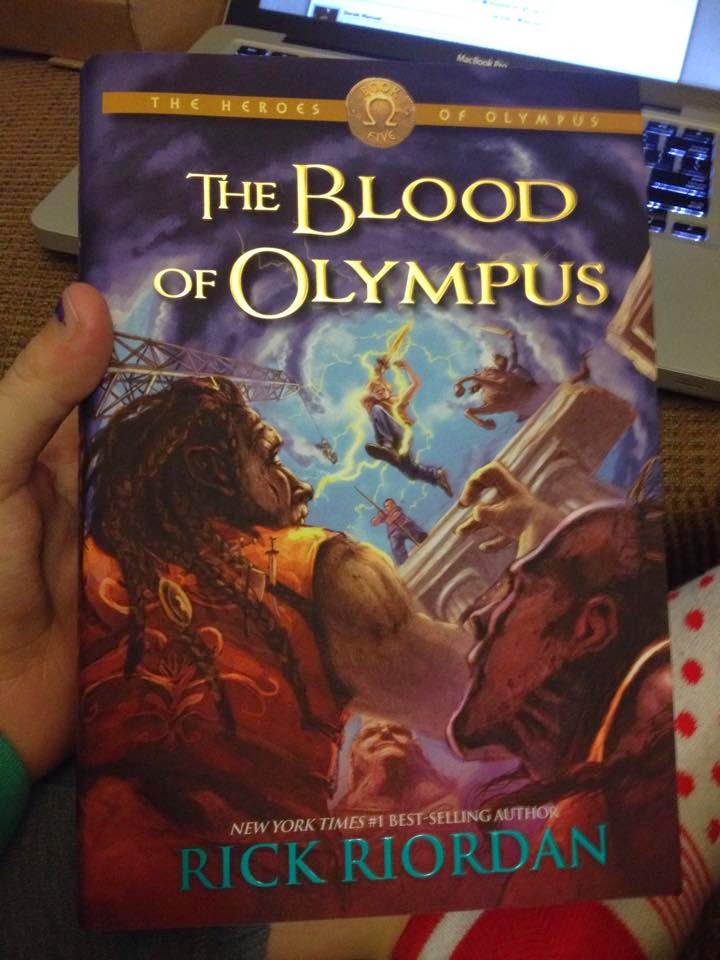 I am going crazy right now.  I have been dying to read this book since we got left with that horrible Mark of Athena cliffhanger.  But now that I’m holding it in my hands, I feel my heart breaking.  The anxiety is overwhelming me.  This is the end.  The very end.

I don’t know why this is hitting me so hard.  When I read The Last Battle, for some reason I just knew that Rick Riordan couldn’t leave Percy and Annabeth alone for long and that there would be more to the original series.  Then we got 5 more books.  And now I’m pretty sure this is the end, at least for a very long time.
It’s like binge watching a tv show on Netflix (Firefly, for example), and all of a sudden you’re at the last episode (which for Firefly doesn’t take very long because there are not many episodes).  And you watch the episode and get left with that ending.  Then you just sit there having a crisis because you don’t know what to do with your life.  (Then you find out that there’s a whole movie dedicated to summing up Firefly and you watch it because you’re so excited that there’s more, and then you get to the part where your favorite character is brutally and quite literally stabbed through the heart and then you develop emotional issues with endings and abandonment and struggle every time you get to an ending because why can’t shows and books series just go on forever and ever?  Or is that just me?)
I’m having that crisis right now.  I want to read it so badly because I NEED to know what happens to all my beloved fictional friends, but at the same time, if I never read the book then it’ll never be over and my fictional friends can just all live happily and I don’t have to worry about anyone dying.  Maybe that’s why I never saw the last Harry Potter movie…
Do any of you struggle the way I’m struggling?
I hate endings. They are never as satisfying as I want them to be.  I hated the ending of Harry Potter (that’s really why I refused to go see the last movie, that and the 7th movie made me want to vomit because it was so horribly done).  I hated Mockingjay because it wasn’t written well.  I never got to finish the Divergent books, so I have no idea how that book ends.  I hated the ending of the Inheritance Series (Eragon) because they defeated the villain, and there were still like 100 pages left of the book, so it was like Paolini was trying to drag out the ending as long as possible.  It took forever to tie up all the loose ends.  I hate endings!  I’m never satisfied.  And I’m terrified of The Heroes of Olympus ending poorly.
I know what you’re thinking.  An author who hates endings?  Isn’t that kind of like your life?  YES!  It is!  And I am determined to make my endings good!  I will end stories the way they are meant to end.  I won’t make my characters do things they promised they would never do. (Come on, Katniss.  The other two books were all about how innocent the people of the capitol were and how no one else should have to go through the Hunger Games again.  Why the heck would you vote to force innocent people into another Hunger Games?)  I will make a villain’s death satisfying (Instead of confusing like Voldemort’s death with mysterious extra horcruxes and such.  What’s up with that?  It was so confusing.  And I will admit that I’m still bitter about so many people dying, but that’s the real world.)  I will tie up any loose ends nicely, so as to not confuse the reader and to make everyone happy.
It’s all easier said than done, though.  So here’s to a wonderful run from Percy Jackson, Annabeth Chase, Piper McLean, Jason Grace, Leo Valdez, Frank Zhang, Hazel Levesque, Nico di Angelo, and any other characters who journeyed with us throughout the series.  I can’t wait to dig in.  I won’t post anymore about it so I don’t ruin anything for those of you waiting to read it.
~Alyson