Yay!  Halloween!  It’s the holiday of candy and costumes.
As an author, I like to think that I’m a kid at heart.  I’m creative and I like to have fun.  I write because I like to pretend.  And because I love to pretend, I love dressing up for Halloween.
When I was in high school, I would dress up as my book characters for Halloween.  I dressed up as Jen, a fairy from a story that I’m planning on tweaking and eventually publishing. 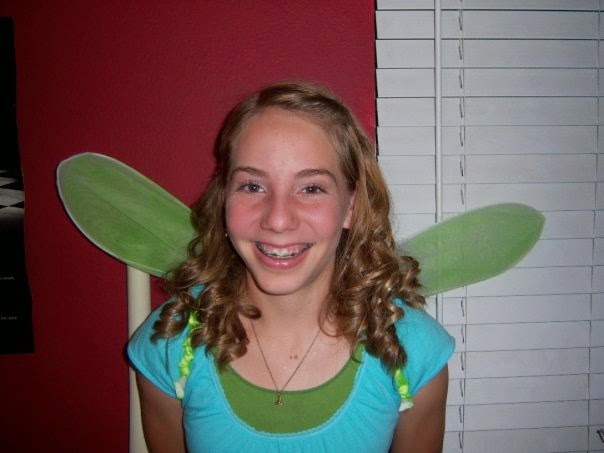 The next year I dressed up as Moxanna, the sorceress from Misunderstood, and I’ve shared parts of that story here on my blog. I have no idea what the fate of this story will be.  I’ll love to finish it and write it, but I never took the time to fully plan out this novel and it came back to bite me.

When Husband of Mine and I first started dating, we dressed up as Perry the Platypus and Dr. Doofenshmirtz.  That idea came because we already had those costumes from a church play we did right before we started dating.  It was fun because we kind of fell in love while preparing that play, so it only seemed fitting to reuse those costumes when we took his brothers trick-or-treating.  I don’t have a picture from that Halloween, but I do have a picture from when we did the play. 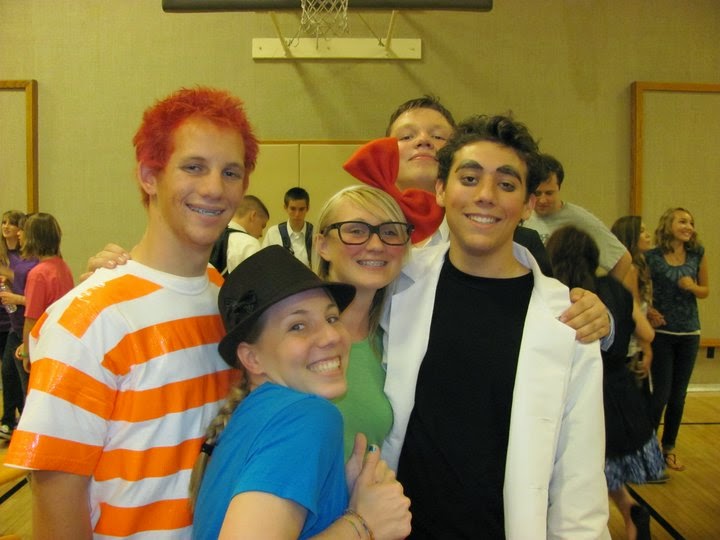 The year after, I went crafty.  It was my first Halloween away from home, and I wanted it to be big.  Also, I had new bangs that inspired my costume.  We went as Hiccup and Astrid from How To Train Your Dragon (which is my absolute favorite movie). 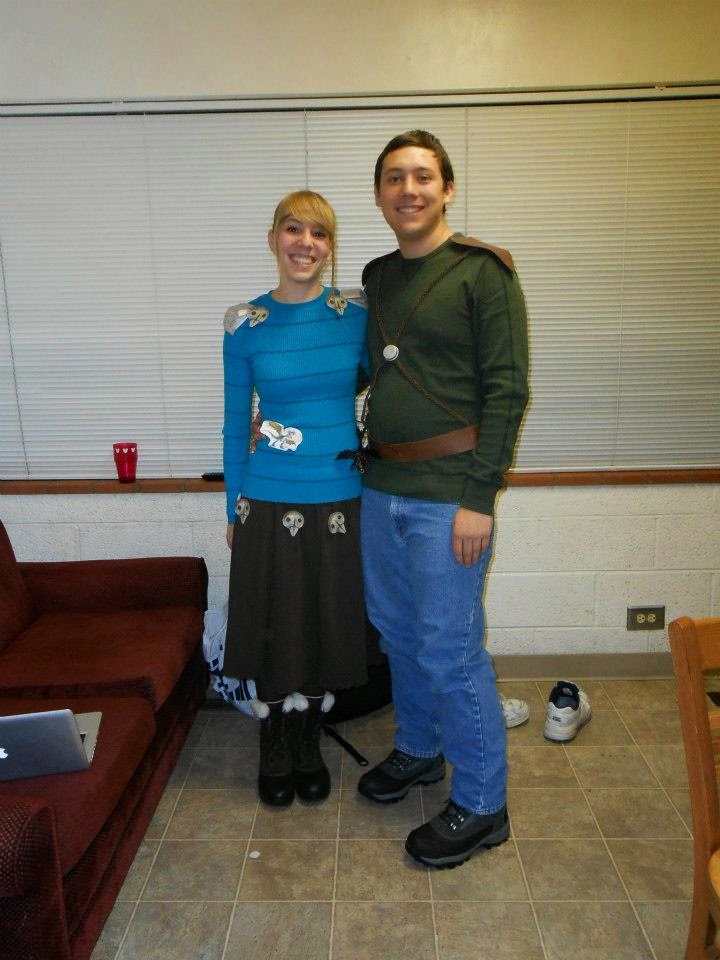 The next year, Husband of Mine and I were poor married college students who couldn’t really afford fancy costumes, so we went with stuff we already had.  We bought the shirts on our honeymoon, so it was easy for us to go as Mickey and Minnie. 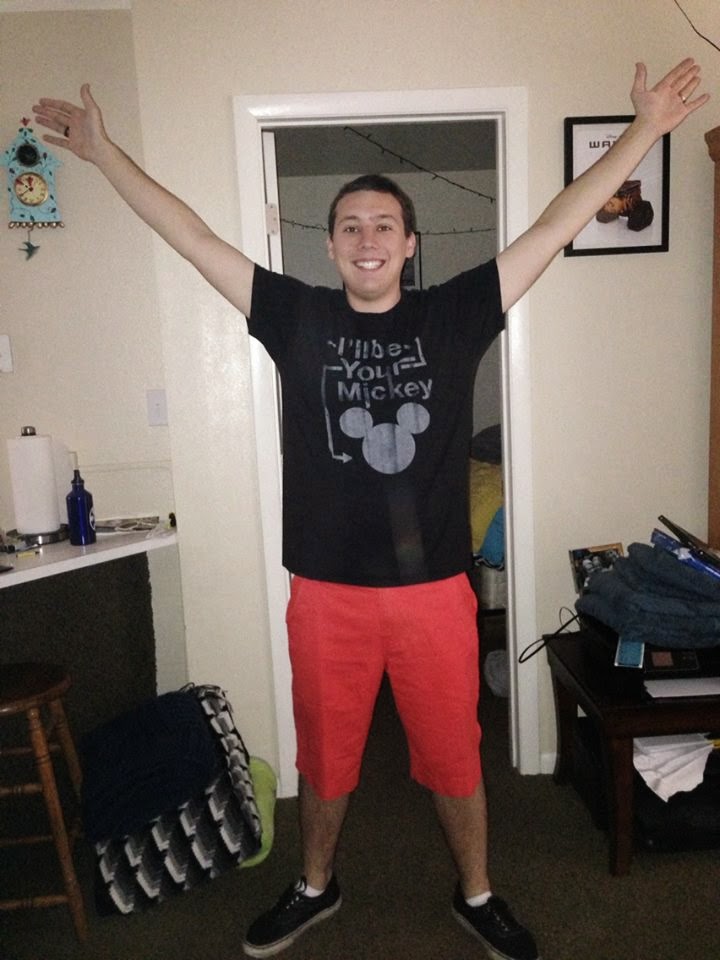 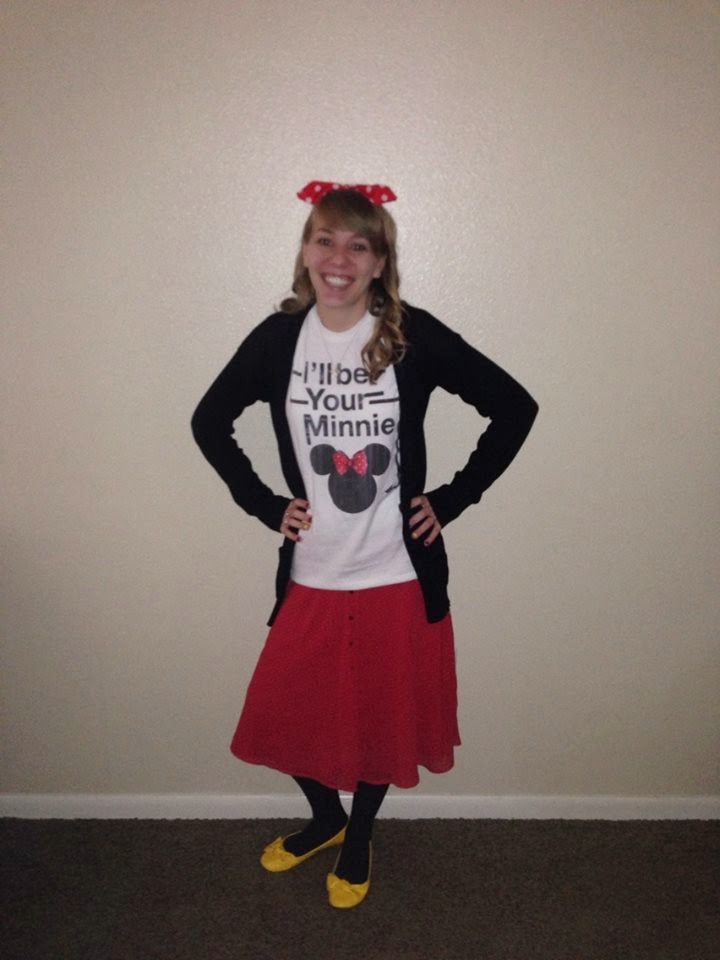 Then we come to this year.  I put months into designing these costumes.  I have been planning this since February.  Then, we adopted Puppy of Mine, and I got to expand the idea.  Well, we went to the Halloween Party tonight, and we won the costume contest.  We were swarmed with compliments as people admired my handiwork.  I feel so accomplished, especially after last year’s boring costumes. Here I present Captain America, his background dancer, and their sidekick Puptain America. 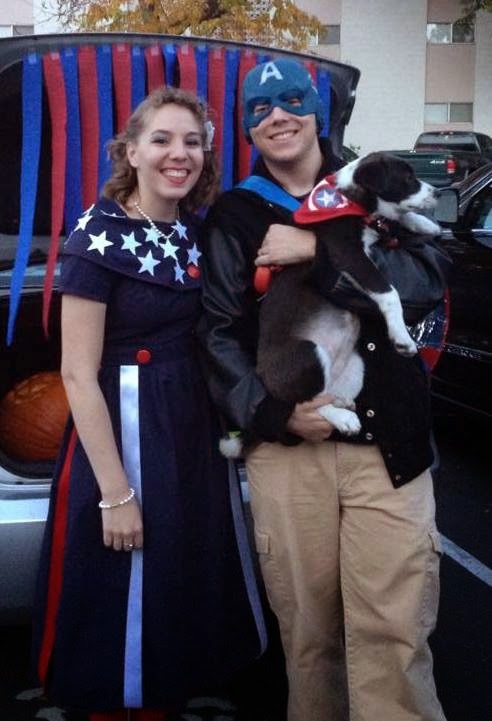 And in case you didn’t get the full affect, here’s another one of the puppy because she is just so darn cute. 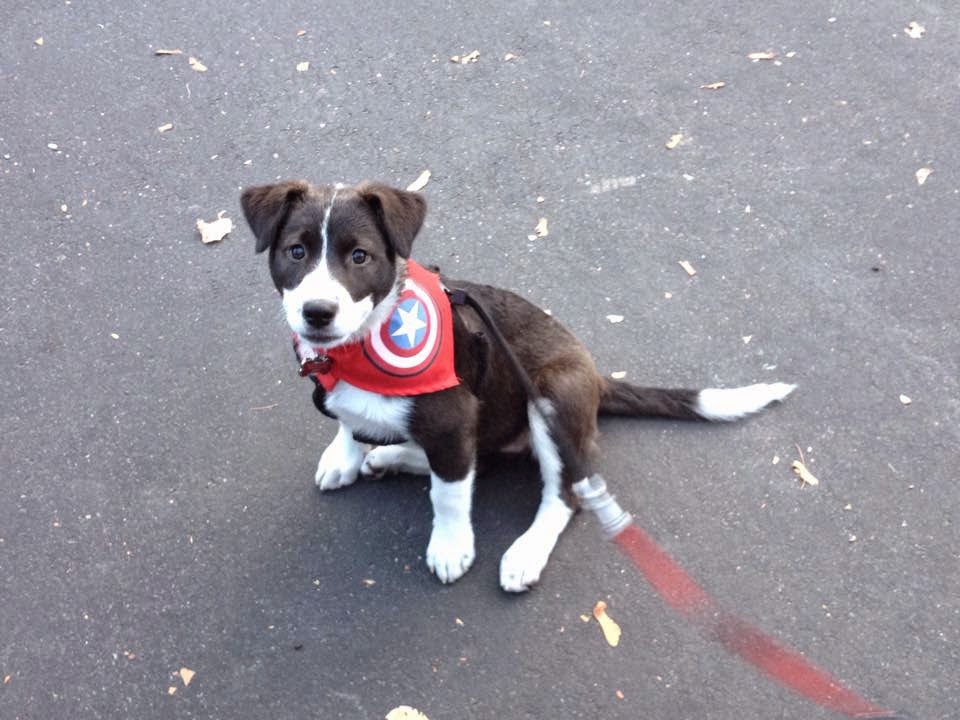 I put my heart into these costumes.  Here’s a better one of Captain America. 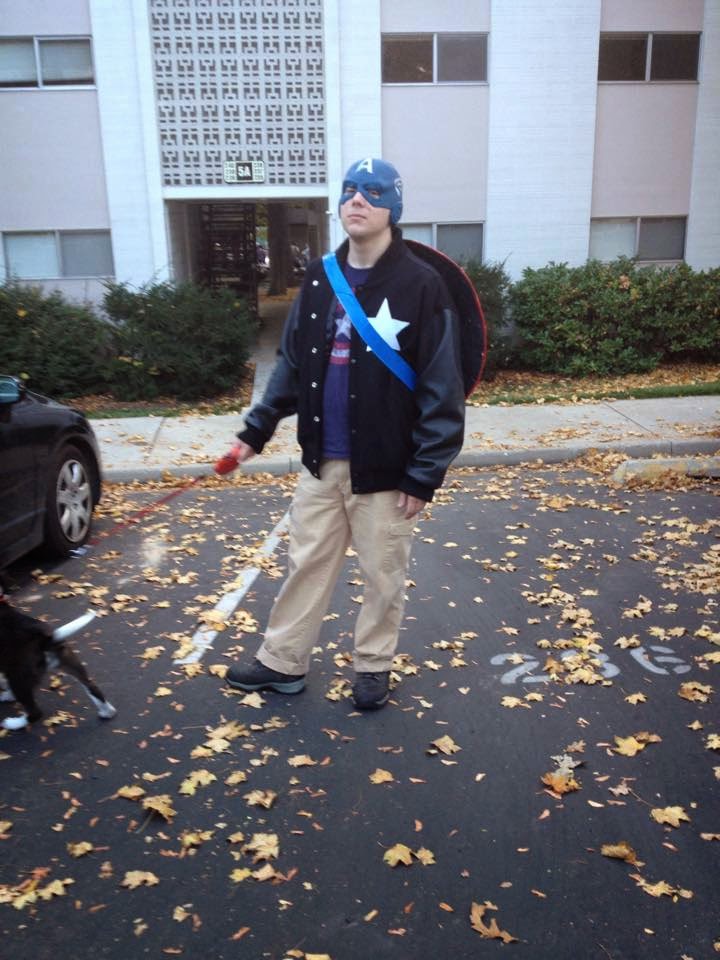 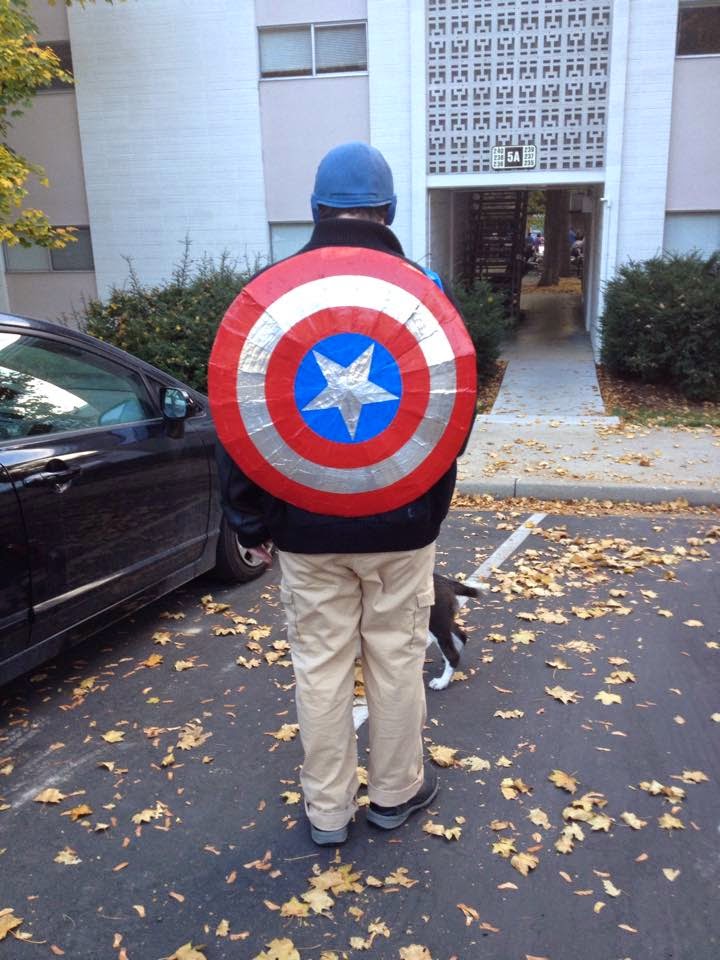 I dedicated my entire week to making this shield and to covering my dress with stars and stripes.  In case you missed out on the drama, my dress lost a button in the wash, so I couldn’t attach the ribbons to the skirt.  To solve the problem, I cut off a second button so I could take it to a craft store to match.  When I got to the craft store, I couldn’t find the second button.  So two buttons were lost and I had no idea what color blue I needed, so I bought 4 red buttons and just switched them all out.  Well, the story ends with me opening my sewing box to get out my needle and thread only to find an extra button for my dress.  If I had just remembered that I saved the extra button, I wouldn’t have lost the second button.  So my dress still has three buttons, but Husband of Mine decided he liked the red better anyway.
Oh, I also burned myself with the hot glue gun, and sliced my fingertips open with the foil tape I used on the shield.  (If anyone needs to make a Captain America shield, here’s a tutorial).  It was well worth the effort though, because we won a gift card for our costumes.
Now to get to the point of my post-  I love Halloween because I can pretend to be someone else for just a little while.  I get to dress up and forget my problems.  I got to live in the 40s for a few hours today, and I got to kiss Captain America.  Yeah, I’m definitely going to brag about that for the rest of my life.  It’s fun to play pretend and it’s fun to be like a kid again.
And that’s why I love reading and writing.  It’s like this every day for me.  Halloween is spectacular for my creativity.  This time of year is bursting with creative energy for me, and not just because fall is my favorite time of year.  Halloween inspires me, and that is why I will always dress up for Halloween. 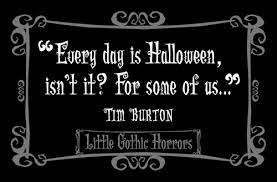 So Happy Halloween to all!
~Alyson