I’ve been procrastinating this post all day long. I literally crocheted until I ran out of yarn. And I justified my tv watching because crocheting is productive, right? While it is somewhat productive, it’s not on my schedule for today and four days in I’m already finding excuses to not get work done. I had a migraine this morning, so I’m not feeling super well, but that doesn’t mean I can’t write a simple blog post. Bad Allie, bad!
Luckily, my schedule today (yesterday, by the time this is posted) included a dog walk, so Puppy of Mine and I went out and I was able to clear my head for a bit and feel less like a shut-in. Even though I very much enjoy not leaving the house, it’s bad for my productivity. Since I finished my last chapter on Monday, I’ve been trying to work on mythology for the Four Kingdoms. I had planned out some basics, but was trying to come up with some actual myths. Unfortunately, I discovered some inconsistencies in my planning and I had to make some major changes before I write my next chapter tomorrow (which will be today by the time this is posted). So I got everything sorted out and everything makes sense now, but I still need one more myth for my chapter. But I’m struggling with a block (thanks, migraine) and I don’t have it written yet, so I’m going to do a free write to clear my mind.
Here’s my prompt. Remember that story, Misunderstood, that I’ve been writing off and on for 7 years (can be found here and here)? I’m using that again. Sylan is the mute brother of Moxi (my favorite character who I use for everything), and Lord Drazen is the evil warlock. Moxi is a sorceress, Sylan has the power to see people’s memories by touching them, and Helen is a healer. Taynen is Moxi’s boyfriend. Every scene is a different POV, but chances are I’ll never finish this and it’ll never make it farther than being published here on my blog, so I don’t really care. 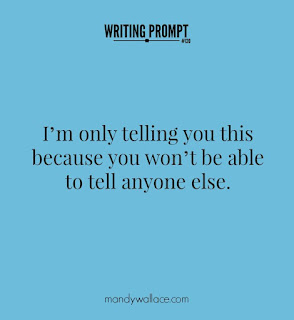 “Fine, Syl, but I’m only telling you this because you won’t be able to tell anyone else.” Moxi grumbled.
Sylan’s childish pleading look turned serious as he took his sister’s hand and waited for her to continue.
“I saw him that night. The night when he tried to poison me and I almost burned down the whole camp. Lord Drazen himself snuck into the heart of the Liberation Legion just to take me out.”
Sylan’s eyes closed as he searched through her memories for that night. Unfortunately, he could only see what she remembered, so most of that night was a jumbled distortion of drugged images. Then he saw him.
A man stood with his back to her, motionless amidst the dinner rush. She looked around over the squadrons, making brief eye contact with Taynen who smiled back and pointed to a bundle at the serving tables. He put together food for her to take on her scouting mission with Zan. She saluted him with one finger, as was their signal, then picked up the pack off the table. As she turned back toward her tent, the man turned to watch her over his shoulder.
There was something off about him. Sylan paused the image so he could examine the man closer. It took a bit before he realized what was wrong. His uniform color didn’t match the rank on his shoulder. It was a simple oversight, but it changed everything.
Taynen hadn’t poisoned Moxi, and the two of them had their memories erased and were sent off for no reason. Moxi and Taynen had their lives stolen from them for no reason.
Sylan played the rest of the memory, even though he knew what happened next.
Moxi returned to her tent to pack a spare change of clothes into the pack with her food, and took out an apple to eat now. As she exited her tent again, she took a bite of the apple.
Now the man was staring at her, waiting for something. As she bit the apple, he winked at her, then turned and stalked away.
Moxi’s vision began to blur, spots flashing all over, but out of the corner of her eye, Sylan spotted Lord Drazen vanish, unnoticed because everyone was watching Moxi.
Zan ran to her side and steadied her, then jumped away. He said something about how her skin had burned him.
She didn’t feel heat, though. She felt like ice.
A blurred figure, one Sylan knew from his own memories was their younger sister Helan, tried to sit her down.
Commander Taire was shouting, and a few people grabbed pails of water and were throwing them on the ground around her.
Moxi wasn’t on fire, but she was close to it. The fire seemed to pour out of her body as she stumbled around.
Sylan saw himself shouting at her, reaching to grab her hand, but before he could, she all but exploded. Heat seared everything around them. The grass turned to dust and people were knocked to their knees.
Then everything turned black. Sylan knew by that point Helan had finally used her powers to drain enough of the poison out of Moxi that she would be okay, but it was too late. The Liberation Legion had lost almost everything. For some reason, Moxi’s fire had decimated everything inanimate around her, but the soldiers were safe, except for one. Helan was left with a large burn down her cheek and neck.