The first draft of a novel is a huge deal. It’s a major accomplishment for any writer to achieve. You spend hours and hours plotting and planning and staring at the computer screen in a crazed caffeine induced state. And writing that last sentence is when all your hard work pays off and you’re finally done. You can say to the world, “I wrote a novel!” And you can share everything you’ve done with the world.
But in reality, finishing the first draft is only the second step to writing a novel, and you’re not even close to be ready to share your writing with the world. 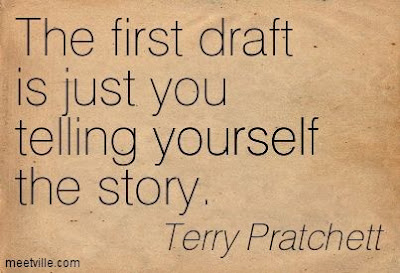 In high school, I ran track. I was a sprinter. I ran the 100, 200, and 400. The 400 was my favorite because it was all about pacing. You couldn’t start off sprinting because you’d be dead by the end. So you’d start off at a more mild pace and save the sprinting until the last leg.

Anyway, I bring that up because that’s kind of like how I wrote the first draft of Powerful. I started off slow and paced myself in the beginning, but realized I was taking too long so I sped up my pace and sprinted to the end.
Only to realize that writing a book isn’t a sprint. It’s a marathon, and you have much more work to do.
The first draft of a novel is just the foundation for the rest of the story. In track terms, it’s that three mile run uphill that builds up your stamina enough so you can run the real race. It’s definitely a major accomplishment to be celebrated, but now the real work begins.
A first draft is not a finished novel. The work is not done. In fact, the hardest work is still ahead. So when you finish your first draft, you can’t step back and stop.
So much of writing is editing. It is so much work and it could arguably be harder than writing down the first draft. The first draft is us telling ourselves the story so we can nitpick every little thing we didn’t like about the way we told it and make it better. But it takes a lot of time and effort.
You have to reread your story over and over again and question every little detail. Why did I choose this word? What was I trying to say here? Why did I include this? How did I think I could be a writer?
Those are just a few of the thoughts running through my mind on a daily basis right now. Editing is stressful, but a very necessary part to the writing process. It’s the only way to get to the end.
You can’t run 400 meters and call it a marathon. You can’t say your book is perfect after only finishing the first draft. So get back out there and finish.
~Allie

3 thoughts on “The First Draft”