I’ve spent the majority of the past few days reading. The Dragon and the Scholar series by H. L. Burke is a series I have been dying to read for over a year now, and I’m so excited to finally have my hands on the books. If you want to check out my reviews, they’re on Goodreads! Dragon’s Curse, Dragon’s Debt, Dragon’s Rival, and Dragon’s Bride.
Apparently binge-reading books is an after Christmas tradition that I have because I was looking back on old Facebook posts and I do this every year. 5 years ago I posted, “4 Books in 3 days……nothing like being anti social for a good series of books.” Which is super ironic because I was going to post almost that exact same thing tonight after I finish Dragon’s Bride (the last book in the series). I guess I’m just awesome that way!
While I’m currently reading my days away with awesome books, Husband of Mine is busying himself with designing my book cover! I only had to annoy him constantly for a couple of days to get him to work on it. I’m so excited!
About four months ago, I was going through writer’s block while in the middle of writing Powerful. Sometimes when I go through a block, I try to channel my creativity through other outlets. One of my favorite things to do is to draw scenes from my book. While I was trying to figure out which scene I wanted to draw from Powerful, I started doodling the Laetorian crest since it’s mentioned in the book specifically. So I drew a quick sketch that looked like this- 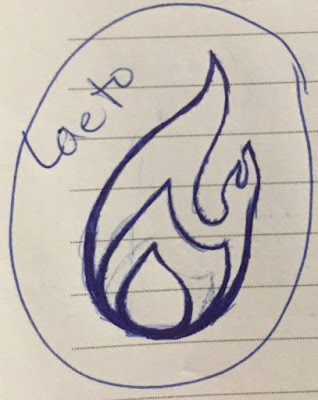 And after that I got really excited and I kept drawing. I went through pages and pages in my notebook of testing out different ideas for the other kingdom crests since I knew I wanted them on the cover of my book but I wasn’t sure exactly what they looked like. So I kept drawing while I talked to Husband of Mine, and eventually I came up with this for Tykra- 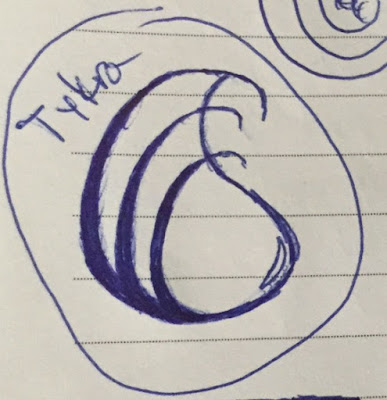 And again, I got really excited and kept doodling. Varn (the air kingdom) was the most difficult because how do you draw air? So I looked online a lot for inspiration. Originally I was going to do three pieces of wheat bending in the wind since Varn is also the farming kingdom, but I didn’t like that so I kept drawing. A few days later I returned to my doodles and came up with this- 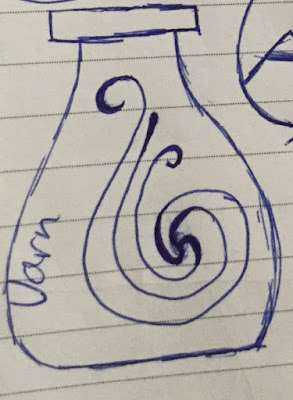 It’s not perfect, but it’s good enough to give my cover artist (Husband of Mine) the idea of what it looks like. In case you couldn’t tell, I spent a lot of time working on shading, but since I was drawing with a blue pen, it didn’t turn out perfect. But close enough.
The hardest one to create was not Varn, though. Zetalon was the hardest since typically the earth element is represented by a leaf or some greenery. But Zetalon isn’t the farming kingdom. They’re the mining kingdom, so I wanted to use mountains. It took me far too long to come up with this- 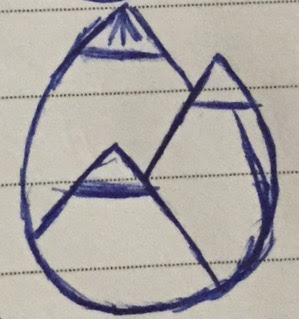 This one is definitely the worst sketch since I messed up a lot and din’t work on the shading at all, but that’s for Husband of Mine to deal with. And now he’s working on designing the final image for each crest and how they will all fit onto the cover. I’m really excited to see the finished product.
After I finish reading my books, I’m going to start planning out a new daily schedule for myself. My old schedule is great, but it doesn’t work as well for editing and I need to dedicate more time to critiquing my friends’ stuff as well. So I’m rearranging my old schedule to fit editing instead of writing. I’ll post that in a few days.
As of right now, I’m working on editing chapter 17. I’ve got to speed up my process if I want to reach my goal of having this next draft done and everything changed in my manuscript by the end of January. The good news is that I’m seriously motivated to get this work done. Things were slow going while I was crocheting Christmas presents, but that’s done and now I’m ready to get back to work. 2015 was pretty great, but 2016 is going to be even better.
~Allie

4 thoughts on “Books and Stuff”