Last week, Magic Writer shared another post about World Building, this time about currency. I got to preview this post before it was finished, and I gave Elise some tips for it, but she had so much more to say than I even realized went into creating currency for a book. And now I’m finding myself checking off things from her post as I’m editing Powerful because I needed to go back through and fix the tidbits about currency in my own WIP. 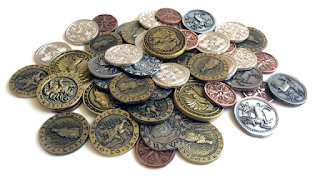 The most commonly seen type of currency in fantasy writing is coins. The type of coin is not usually specified unless important to the plot, but it’s also not the only type of money used because it may not be the most logical currency for your writing. Some societies may skip currency altogether and simply barter. Depending on what you’re writing, though, currency may be necessary.
But how do you decide what type of currency to use? You figure out which material is available in the region, and go from there. When someone mentions “coins”, typically people picture metal coins (gold, silver, bronze, copper, etc.), but there are other materials that could be used as well. Wood, stone, shells, paper, etc. The currency has to be abundant enough to replicate, but not so abundant that it loses it’s value because people can find it on their own.

For example, in Powerful there are four different kingdoms and each kingdom has their own unique power (fire, water, air, or earth), and each kingdom relies on those powers to survive. Tykra, the water kingdom, is made up of a lot of fishers because it rests on the ocean, and because of the forests, it also uses lumber for trade with the neighboring kingdoms. There are no gems or metals in Tykra. So why would they use metal coins as currency (as they did in the first draft)? It doesn’t make any sense. Paper or shells makes much more logical sense. But in Zetalon (the earth kingdom), stone or metal coins are easy because most of the people work as miners in the mountains. Trees are not common, so paper money wouldn’t work.

Normally I wouldn’t make such a big deal about currency for my writing, but it actually plays an important role in Powerful. There’s a background conflict about trying to unify the currency for the Four Kingdoms to help with trade (like Europe and the Euro), and because it is mentioned multiple times throughout the story, it’s important. To make it understandable for the reader, it needs to make sense.
The other important thing with currency is to give it a name that is easy to remember and fits with the story. Naming a coin “gobbertine-poiterus” isn’t going to help anything. Magic Writer gives a few real life examples- the English Pound, the U.S. and Canadian dollars, the Euro. She also uses a few fictional examples.
The one that jumped out at me was the Galleon, Sickle, and Knut from Harry Potter. The names are easy to remember, but the values are not. “There are 17 Sickles in a Galleon, and 29 Knuts in a Sickle, meaning there are 493 Knuts to a Galleon. Can you imagine what Maths lessons would be like? I expect they all knew their 17 times table extremely well.” How is that going to help your readers? It should be something simple.
Most fictional currency is based on real currency, where the values are easy to divide. For example, in England there are 100 pence to a pound sterling. In America, there are 100 pennies to the dollar (and 20 nickels, 10 dimes, 4 quarters, etc.). It’s not complicated to figure out those values. Also, the name quarter is very helpful when figuring out how many quarters in a dollar. See? It just makes sense.
I have yet to come up with official names for the monetary systems in Powerful, but now I know that it’s more important than I realized at first. It’s an essential part of building a fictional world that feels real to your readers.
~Allie

1 thought on “Currency in World Building”