I haven’t exactly been living up to my goals this year. Whoops.

In my resolutions at the beginning of the year, I set up quite a few goals for myself. Then I made a small life-changing announcement and said I only had plans for the beginning half of the year (because I was having a baby in July). Well, things got all wonky when my morning sickness didn’t go away, and I lost my job and spent the first 3 months of the year looking for a new one (that didn’t happen either, in case anyone was wondering).
To sum up, I didn’t:

But, I did quite a bit of other stuff that I talked about last month, like:

So, at least I’ve got something to show for my year. In hindsight, I don’t know why I set such lofty goals for myself. I pushed myself to hard and burned out fast. But, I wasn’t quite sure how my pregnancy was going to go, so I didn’t know how to set more realistic goals.
Having now adjusted to life with a roly poly baby who disturbs my writing frequently either because he gets into things he shouldn’t or because he’s unhappy for whatever reason, I know more of what I can expect from myself for the next little while. Of course, once he learns to crawls/walks, things may change again. But, here’s what I have to look forward to now- 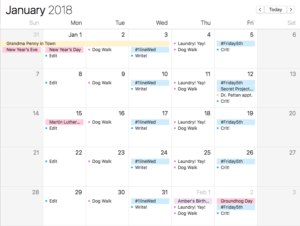 Every week I have 3 specific goals-
I spaced them out so Monday is editing, Wednesday is writing something new, and Friday is critting. Tuesdays and Thursdays I usually get together with my mom and grandma, so I saved those days for playing catch up (or doing something extra).
You’ll see that January 12th is the deadline for Secret Project #1. Secret Project #1 is pretty much done at this point, so right now I’m focusing on editing Secret Project #2 (the next draft is due at midnight on Dec. 31st). March 14th is the final deadline for Secret Project #2. And in September, I start Secret Project #3.
Between those, I will focus on editing Powerful and actually starting on one of my still-unnamed fairy tale retellings. Come January, I will update my sidebar word counts for you! I have 21 chapters and an epilogue left for Powerful, and even though my retellings are plotted out, I have no clue how many chapters they will be. I’ll let you know in January when I start working on it!
In addition to my weekly goals, I will blog twice a month–once for me (here on Hypergraphia), and once over on the JL blog. I hope to start picking up my presence again here soon, but that will get added back in after I adjust to my new schedule. Unfortunately, my fiction comes first. In the meantime, I’ve updated my author bio! I think this one’s gonna stick for a while.
What are your goals for the new year?
~Allie